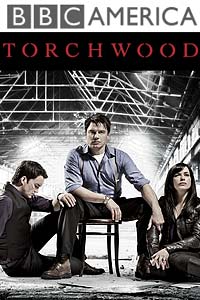 This week BBC America ran the Torchwood miniseries Children of Earth one episode a night all week building to tonight’s epic finale. Sunday, they will run the whole Torchwood Children of Earth series with all five episodes back to back, so there is still time to catch it. Purely from an entertainment perspective, I recommend watching the first four episodes and skipping the fifth. Children of Earth has Torchwood’s usual style and panache and dark-edged fun. Captain Jack Harkness, played by the pretty John Barrowman, even has a couple of nude scenes which BBC half-heartedly fuzzed out for the American audience. One can always hope they will be censor fuzz-free on the Torchwood Children of Earth DVD release. The DVD comes out next week and it is pre-ordering at a #8 ranking for all DVDs on Amazon.

Torchwood is reportedly BBC America’s biggest hit ever. As usual, Torchwood has accompanying behind-the-scenes DVD extras segments with Children of Earth. The interviews in this one with show creator (and primary writer) Russell T. Davies are interesting and insightful. The BTS here is more about how the writer and actors feel about the subject matter, and less focused on the special effects the way earlier seasons of the show were.

My favorite aspect of Torchwood has always been that it is science fiction aimed at an adult audience and makes no pretense of being for children or being in any sort of YA genre. Torchwood Season 3 aka the Children of Earth miniseries asks a moral question: If an apparently unstoppable alien foe asked you to make an immoral and misery-inducing decision or face almost certain annihilation, what would you do? Do you give in to terrorists? Do you negotiate with terrorists? Do you accept physical destruction over psychological and societal destruction or vice-versa? Do you welcome your new alien overlord?

The Torchwood answer is that the people in charge in the U.K. would definitely go with immoral misery inducing over righteous probable immolation. Maybe this is accurate. We did fight a revolution and put together documents guaranteeing Americans the right to bear arms to protect us from the government . . . because the founding fathers of the USA did not trust the British leaders.

A problem with this Torchwood season is that the British answer is sort of supposed to be the world’s answer and I think Russell T. Davies is dead wrong in his idea of how other countries would handle such a moral dilemma. I do not believe that all other nations would see that England had made a bad deal with a drug addict alien, and just lie back and get fucked, while thinking of England. Without giving too much away, I have to point out that the citizenry of a significant number of the world’s nations are armed and most people feel a core lizard-brain, bone-deep, biological imperative to protect children. Sure, there are people like me who are more likely to comply with an unreasonable polite request than a reasonable demand with a threat attached. But, when it comes to children, I think the urge to protect them goes beyond anything volitional for almost all people, even those normally subservient to authority.

As a science fiction hero, Captain Jack Harkness was inspiring because he was happy-go-lucky and knew how to have a good time, despite being tormented by immortality and all he had seen, a fifty-first century guy who knew all the ladies and gents were hot for him and saw gender as a quaint criterion for choosing sex partners. Captain Jack Harkness thought out of the box and saw solutions when everyone else was ready to give up hope. He was sometimes pragmatic and unsympathetic to the pain of mere mortals, but he did not tend to roll with acceptable losses because he was a guy who liked to win. It is so rare to see winners treated as good guys in genre fiction that the Captain Jack Harkness characterization was really refreshing.

I can’t tell if Russell T. Davies is sick of doing Torchwood. Certainly that is the conjecture of a lot of Torchwood fans who felt Children of Earth went a little too far off the hub. Given how big a record-setting hit the show is, I can’t see BBC just dropping it. I realize BBC has been beefing up their science fiction fare with Primeval, the new Being Human, and of course old stalwart Doctor Who, but I just don’t see the businesspeople dropping Torchwood from all future Supernatual Saturdays. In the BTS interviews, the Torchwood actors appear viscerally angry about the trajectory of Torchwood Season Three. Partly because parts of Torchwood Children of Earth are genius, it becomes very frustrating how many holes are in the plot and how out of character a number of beloved characters behaved. Gwen Cooper, played by Eve Myles, gets a lot more action hero and less kind and less determined. Gwen Cooper’s clumsily loving husband Rhys Williams, played by Kai Owen, suddenly gets all bad-ass and understanding. Ianto Jones, played by Gareth David-Lloyd, stops being the hot secretary Jack is banging and starts whinging about where is their relationship going. Russell T. Davies has had such a large and good impact on the genre and I always mean to use my psych degree for good instead of evil, but, for fuck’s sake, Children of Earth comes across like Russell T. Davies has either let success go to his head or used to be in love with whomever he based Captain Jack Harkness on and they just had a bad break-up or the guy got busted for child-molesting or something equally faith-destroying. As a Torchwood fan, I have to say I did enjoy the first four episodes of the miniseries, even though they seemed to somewhat violate the internal consistency of the Torchwood world, but the resolution leaves me feeling kind of angry and disappointed.

Which all leaves me with the question: How likely would you personally be to give in to threatening demands from a junkie from another planet?

Posted by Amelia G on July 25, 2009. Filed under Blue Blood. You can follow any responses to this entry through the RSS 2.0. You can leave a response or trackback to this entry
Tags: actors, addict, amazon, bbc, being human, captain-jack-harkness, children of earth, dark, doctor-who, dvd, john-barrowman, primeval, sex, torchwood, writer