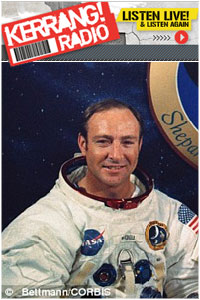 Okay, this is just plain awesome and entirely made my day. I am mostly familiar with Kerrang! for being the well-written and well-photographed hard rock magazine which used to cover a lot of the bands who played Taime Downe’s late lamented Pretty Ugly nightclub in Los Angeles. Apparently, on the other side of the pond, Kerrang! also does radio and television and such. One of their on-air personalities is Nick Margerrison who does a show called The Night Before.

I’m not sure what astronauts have to do with hard rock, but I guess MTV’s early call sign video interlude involved the moon landing, so maybe it all just fits together in some secret cosmic way. At any rate, Nick Margerrison was interviewing astronaut Edgar Mitchell, on Kerrang! Radio, when the famous astronaut casually pointed out that life definitely exists on other planets and aliens have visited earth. The obviously usually-smooth Nick Margerrison is kind of like ha, ha, wait are you serious? He sort of sputters and says wow a lot, while waiting for his interview subject to admit he was kidding.

Astronaut Edgar Mitchell: “We’re not alone in the universe at all . . . The UFO phenomenon is real, although it’s been covered up by our governments for some time.”

On-air personality Nick Margerrison: “I’ve had crazy UFO nuts before, but I’ve never had Dr. Ed Mitchell, the 6th man to walk on the moon, a respected scientist in his own right, announce to me that we’ve been visited by aliens from other planets and they definitely are out there and there’s no debating it . . . I’m just wondering if I’ve stumbled on astronaut humor and in a couple minutes you are going to go I was only pulling your leg.”

The Apollo 14 veteran astronaut goes on to point out that he grew up in Roswell and we really did have aliens come to Roswell, New Mexico in 1947. He says there are aliens who conform to the popular concept of little humanoid creatures with big heads and big eyes. Additionally, we are lucky the aliens are not hostile because we’d be totally gone by now if they were. The record-holder for longest moonwalk ever says that some governments are going to be declassifying their UFO information soon and implies that, in preparation for this, the Catholic church issued a proclamation that

“Belief in life on other planets does not compromise your Catholocism.”

Even more awesome than the conversation between Nick Margerrison and Edgar Mitchell is the conversation between The Night Before producer Alex and the NASA media rep. Kerrang! had the balls to post their producer’s call to NASA where they asked if anyone from NASA wanted to come on the show and comment on Edgar Mitchell’s assertions. Kerrang! did have the consideration to bleep the publicity person’s name and email address though.

Although the NASA guy says he will get back to the show, he never denies what the astronaut stated, just says he needs to find someone willing to dispute it. As it turns out, apparently no one was willing to go on the radio to refute what the devil-may-care 77-year-old astronaut had to say. NASA merely emailed the show saying,

“Dear Alex,
NASA does not track UFOs.
NASA is not involved in any sort of cover up about alien life on this planet or anywhere in the universe.
Dr Mitchell is a great American, but we do not share his opinion on this issue.
Thanks for the opportunity to comment.”

Is Dr. Ed Mitchell telling the whole truth, senile, or pulling a damn funny practical joke? There’s just no way to know, but it makes for great listening. Kerrang!’s interviewer asked him if he was worried for his safety, blabbing stuff like this.

Astronaut Edgar Mitchell: “I don’t think they are knocking anybody off for that any more.”

Posted by Amelia G on July 23, 2008. Filed under Blue Blood. You can follow any responses to this entry through the RSS 2.0. You can leave a response or trackback to this entry
Tags: aliens, apollo-14, astronaut, edgar-mitchell, kerrang, moon-landing, mtv, nick-margerrison, radio, rock, science fiction, taime-downe, ufo