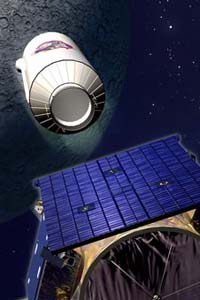 I hope we have recreational space travel within my lifetime. And I’d kind of prefer it if all the extraterrestrials didn’t hate Americans by the time that happens.

When I went to high school in Germany, my (brief) boyfriend at the time was beaten up by protesters during anti-American missile riots. His father actually was a Colonel in the U.S. Air Force, but the pacifists clocked him for a beating because he was hanging out with someone whose parents were attached to an African embassy. Although the hilarious irony of getting his ass kicked by pacifists was lost on their victim, the fact that Americans don’t always exactly get the benefit of the doubt abroad really is kind of a drag.

This weekend, NASA TV will be rebroadcasting an event they did today to raise awareness of the need for clean water. Guy Laliberte, founder of — wait for it — Cirque de Soleil, spent some time on the space station to put this fiesta together and other celeb participants included “former Vice President Al Gore, Canadian Space Agency astronaut Julie Payette, actress Salma Hayek and singers Shakira and Bono.”

But the salient point here is that WE JUST BOMBED THE MOTHERFUCKING MOON! In theory, the idea was to check whether the moon has water we could utilize. Presumably by bombing it. According to multiple accounts in the world’s media, the Indian moon mission Chandrayaan already clearly scientifically proved that there is water on the moon. And they didn’t need to bomb anything to prove it.

Many conjecture that the USA is testing a new warhead. I hope not, but I also know that, despite all our hand-wringing about nuclear disarmament, our country is the only one asshole enough to actually have dropped atomic bombs on human beings.

On a lighter note, after the first broadcast of the NASA and Cirque de Soleil collaboration Moving Stars and Earth for Water, my Twitter lit up with the banter of my witty compatriots. Forrest Black tweeted, “I sure hope we don’t discover the moon’s subsurface is rich with fluorocarbons…the hard way.” Syd Blakovich twittered, “I’m pretty sure NASA is totally undoing all the blood sacrifices the Aztecs did to delay the end of the world w this moon/rocket business…I’m just worried I’m going to have to start going blood sacrifices, mainly because I already have too much on my plate.” Jessie Seitz twittered, “Good to that during this recession our tax money will FINALLY find out if “ice is hidden in the perpetually dark lunar craters” of the moon.” Halcyon tweeted, “I think it’s about time we knocked the moon down a few notches. That bastard has been mad-dogging us for YEARS!”

Seriously, for fuck’s sake, do we really need to knock the moon off kilter? Has earth not had enough tsunamis? And isn’t all that expensive? Okay, this is the part where I’m just going to degenerate into using very very very bad language, so I’m just going to eat a delicious organic Braeburn apple and watch cartoon cows I TiVoed from Nickelodeon now. Or maybe the second half of The Company on On Demand. Spies on secret missions could be diverting . . .