Torchwood Season 2 Very Out on DVD 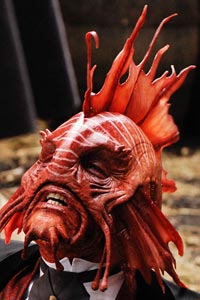 If you are not familiar with Doctor Who, allow me to give you the basic overview. The Doctor is a regenerating, very long-lived, highly-curious, extremely intelligent womanizer from outer space. Gallifrey in the something or other nebula, if memory serves. The Doctor Who SF serial has been around for ages and gone through many iterations with different actors playing the man who invites strange women to come for a ride in his penis car TARDIS and see the world. And other worlds. In the past, present, and future. When they start to age, the dashing Time Lord ditches them. If guys sometimes being a little piggy towards their lady friends troubles you too much, you may want to go re-read some Ursula LeGuin instead of watching, but these BBC shows really are fun.

In the Christopher Eccleston Doctor and Billie Piper companion iteration of the show, the character of Captain Jack Harkness was introduced. Jack is a 51st century kinda guy, omnisexual and happy to make sexual conquests of men and women. For a while, Jack, the Doctor, and Rose travel together in the TARDIS on Doctor Who and, although it is never explicitly stated, the implication is that they are having hot three-way space-faring sex.

Although many of the earlier incarnations of Doctor Who were pretty cheesy in the effects department, the Russell T. Davies version is more pleasing to the eye and more convincing. He ups the anti even farther with the sleek production design and good looks of Torchwood. 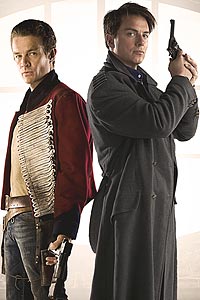 The first season of Torchwood is reminiscent of frosh year of college in the way the characters have some mix and match attractions and jockey for position as they get used to and attached to one another. Jack is slightly more queer than bisexual in season two, but he still appears delightfully prepared to eat anything. Even Freema Agyeman’s incredibly annoying Martha Jones who followed Rose Tyler as the Doctor’s companion on Doctor Who and never even got into his pants. The second season also has a bit less alien-hunting and playing with cool extraterrestrial technology than the first. But the second season has lots of fun with the character of Captain John Hart, ably played by fandom veteran James Marsters. Captain John is Captain Jack’s former Time Agent partner and, of course, because Jack is a slut and a half, Jack’s former lover.

One of my favorite things about Torchwood is that it is not made for children. Science fiction books acknowledge that the fan base is not exclusively eleven-year-old boys, but television and movies rarely do, so Torchwood is a welcome difference in the field. A lot of science fiction, fantasy, and horror television assumes its audience is young, can’t handle difficult themes, and needs to be whomped on the head with any point. Torchwood maturely, in every sense of the word, addresses adult themes of sexuality. It is a very nuanced show which assumes its audience is intelligent and able to pick up on subtleties in how the characters interact.

And, for your immediate viewing pleasure, we’ve got a hot and sexy Torchwood season 2 photo gallery courtesy of the nice folks at BBC America.

Posted by Amelia G on September 28, 2008. Filed under Blue Blood. You can follow any responses to this entry through the RSS 2.0. You can leave a response or trackback to this entry
Tags: bbc, billie-piper, bisexual, captain-jack-harkness, christopher-eccleston, doctor-who, dvd, jack-harkness, james-marsters, john-barrowman, omnisexual, photos, sexual, torchwood