I got a free six month Hulu subscription when I replaced my first gen TiVo with a new one. The new TiVo ties in to Netflix and Hulu and Amazon movies and such. The Hulu interface is comedically bad, counterintuitive and with like eight clicks to get to anything and commercials shown during shows, but Hulu does have an interesting editorial sort. Like they’ll have shows with rare archive images and footage of American history being made and buckets and buckets of anime. Plus, I have no idea why BBC America is not showing the superhero juvenile delinquents of the Misfits TV show or the antisocial puppets of the Mongrels TV show (or why Amazon only has Mongrels: Series 1 [Blu-ray] which will work in the UK only), but fortunately Hulu is showing them.

As a big Sesame Street fan, Mongrels is pretty perfect for me. The sort of viewpoint character is Nelson, a metrosexual fox, in unrequited love with a naughty star-chasing dog named Destiny. Most of the animals live in the yard, but Destiny lives in the house. My favorite characters are Marion the cat and Nelson’s cousin Vince. Vincent the fox is a genuinely wild animal, with rude boy politics (and musical chops), a hilariously bleeped stream of (presumed) expletives, and I suspect him of secretly being behind the popular online gaming site Foxy Bingo. (Technically it was Vinnie Jones, English actor and retired Welsh footballer, who was the sponsored celeb for one of Cashcade’s sister sites for Foxy Bingo, but there is no reason not to think that all their best sponsored celebrities will be named Vincent. Vinnie Jones was awesome as Big Chris in Lock, Stock and Two Smoking Barrels and as Bullet Tooth Tony in Snatch. So really, have badass Vinnie Jones and badass Vince the fox ever been seen in the same place at the same time?) Foxy Bingo is a seven-year-old site where users can play 75 ball and 90 ball bingo for dough. Super fun character. Marion the cat lives in a garbage can (dustbin in Britspeak) like Oscar the Grouch, but Marion is much more positive than Oscar, although his asides to camera often indicate he is just playing things by ear and has happily no idea what is going on. I am extra amused that the company behind these puppeteer critters is called Talk to the Hand, which is pretty much the best name ever for a company which does puppet shows. Okay, really Foxy Bingo sponsors celebrity best-selling author and former Page 3 girl Katie Price, but Katie Price is mentioned on Mongrels. 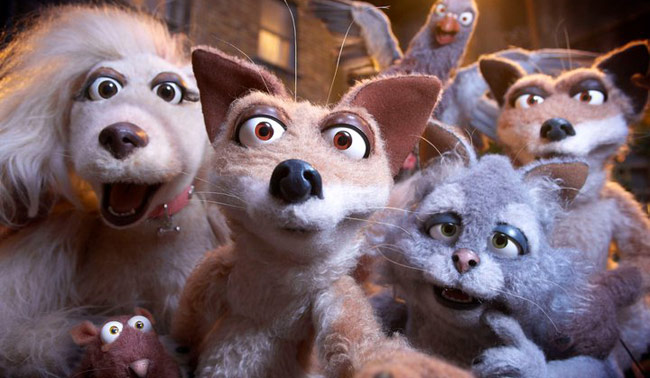 Posted by Amelia G on February 17, 2012. Filed under Headline, Popcorn. You can follow any responses to this entry through the RSS 2.0. You can leave a response or trackback to this entry
Tags: amazon, anime, bbc, destiny, foxy bingo, hulu, katie price, marion, misfits, mongrels, nelson, netflix, oscar, oscar_the_grouch, puppeteers, puppets, sesame, sesame-street, talk to the hand, tivo, vince, vinnie jones