What Sorts of Games do you Play

Different platforms lend themselves to different sorts of games and it’s interesting to me that the games I like on my phone tend to be different from what I enjoy on an iPad or on my computer. Obviously, the former tend to lean towards graphical puzzle games like Soda Crush, but on my actual computer I like fairly simple structural task oriented games. Something about the logical to-do list nature helps me concentrate on structuring my real life goals in hierarchical task chains. I used to enjoy playing WoW, back when it was much less intensive and I didn’t feel like I needed a super-computer to run it while getting anything else done at the same time.

So, these days, I pick up little sort of stats based nearly textual games I can get into while still working in other windows. I like something I can make a few moves in while a Photoshop batch process runs or files are uploading to a server. I used to play this weird arena combat game that I can’t think of the name of right now and lately I’ve been giving Immortal Day a shot. I like that it’s not bogglingly complicated, while still offering plenty of short things to do as you develop your character in a world of vampires and vampire hunters. Some of the tasks can be a bit repetitive, but on the whole, it’s a pleasant diversionary activity reminiscent of the good old days of after school computer clubs and strategic games meetups with all my dorky friends.

I can’t tell just yet whether Immortal Day gets much more complicated as the character I’m running gets to be a bigger fish in the pond, but for now, I’m enjoying exploring their little stats based universe. 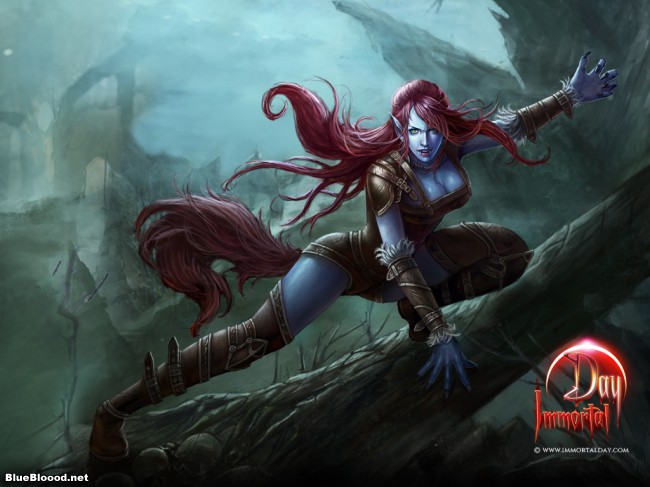 Posted by Forrest Black on December 22, 2014. Filed under Popcorn. You can follow any responses to this entry through the RSS 2.0. You can leave a response or trackback to this entry
Tags: games, immortal day, vampires