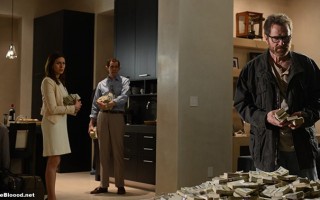 
When I wrote up Breaking Bad at the end of season one, what resonated with me most was the way the show is about how all the little choices we make have ripple effects on our lives. The show seemed very much about middle-aged regret. I’m happy AMC’s Breaking Bad returned to its character-driven writing […]


I admit that the majority of my unsavory pals would cheerfully take all of their clothing off in a grocery store for pretty much any reason at all. The partners of those in relationships would not think stripping down in a public place was indicative of anything out of the ordinary. Episode 203 of Breaking […]

Do loved ones make you stronger or more vulnerable?


Do you feel having loved ones makes you stronger of more vulnerable? In “Grilled”, episode 202 of Breaking Bad, hopped-up tweaker drug lord Tuco tells high-school-chemistry-teacher-cum-meth-chemist that he likes doing business with a family man because there is a lot of collateral. My immediate thought is that the fastest way to conquer Tuco would be […]