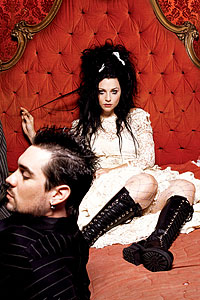 I used to watch music videos and just feel the mood they were trying to evoke. I’d believe that the peformers really were that cool. It was all so sexy and exciting. I just wanted to pass through that TV screen into a cooler and more passionate world.

Given that I kind of did manage to live my life so that I got to pass through the screen to the other side, I actually only got cable television because I was offered a really good deal on getting it with a cable modem. Time Warner Cable recently bought out Comcast, who I think bought out RoadRunner, and maybe AT&T was in there somewhere. I didn’t totally follow all the transfers and my cable bills literally did not have a return address on the envelope for a while because the changeovers were so hasty.

The upshot of all of this is that I recently had a channel line-up re-shuffle and it is easier for me to TiVo lots of music video shows, fast forward through stuff I don’t like, and still get to enjoy lots of videos I do like and might not have come across otherwise. Music videos used to be one of my favorite forms of entertainment and one of the only types of television I would watch. My college had a room in the student center with a gigantic projection TV and a friend of mine (who had a first and last name which were surreally both slang for penis – he was even more surreally named after his father) and I used to sit there and watch MTV on it, missing stuff we were supposed to do because we were just going to stay until the good video came on. When I finally had access to a television with cable and a closed door, I wasted no time finding which shows had the highest preponderance of rock videos I found worthy of self-pleasure.

My new Time Warner Cable line-up includes a couple of MTVs and VH1s and CMTs, and the delightful relative newcomer FUSE. I should be in heaven, but I have trouble stopping the negative ideation those video channels evoke in me today. The problem is that I have too much of a sense of how the sausage is made and I’m discomfitted by a lot of their cooking methods. I see a video with some teenage boy singing about how wrong it is to beat your girlfriend and the song is catchy enough and the boy is okay-looking and has a nice enough voice which works for the material. But I can’t stand the pretense that some teenager wrote the song.

Cablevision Systems Corporation, the corporate parent of FUSE, has sports holdings which account for nearly 20% of their revenues. I wish music understood teamwork like the world of sports does. Sports fans know and understand that, while some people are really standout stars, there are a number of positions which need to be played and the coaches get airtime too. If someone gets too flamboyant in drawing attention to themselves, they can get penalized for showboating. In the world of music, there is this desperation to pretend that the lead singer just came up with everything. Unfortunately, the product is so manufactured that a lead singer who really can come up with his or her own songs, style, and message is likely to be buried and ripped-off and asked to change, but never played by the music video stations. A headstrong artist is a pain in the ass and nowhere near as desirable as a compliant and good-looking youth who can sing and dance and sign contracts which offer a low percentage.

Dictionary.com defines the band’s name as “to dissipate or disappear like vapor” and the Gurl.com top interview in a Google search for amy+lee+evanescence+interview explains the band’s name as “The word Evanescence means to dissipate like vapor, it puts an image in your head of like a ghost/specter that isn’t really there.” The Gurl.com interview has no interviewer credit. So I watch videos late at night and I finally start wondering if Evanescence really exists in any man-in-the-street sense of what a band is or if some enterprising producer for the surreally-named Wind Up Records just made up the whole thing to, you know, wind up the public. And sell fourteen million records. Which is a lot.

The question is, if Amy Lee and Terry Balsamo don’t really write Evanescence songs, don’t pick out their own clothes, don’t have the personal lives claimed for them, or maybe don’t even speak English, does that make their performances less enjoyable for their audience? If it does reduce the pleasure, does that mean it is good and reasonable to hide the origins of the music and the performers? Is it okay to lie, if it makes listeners happier? Is it still okay to lie, if it makes listeners happier, but the lies mean a genuine struggling band, who tells the truth, can not compete?