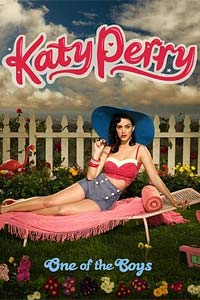 So I really think MTV needs to debut a liquor lesbian duet between Katy Perry and Amy Lee where they snog by the end. See, poor Katy Perry was asked by Steppin’ Out magazine who she would want to kiss. Her singing about how she kissed a girl and all. Katy Perry told Steppin’ Out that she would like to recreate the Madonna and Britney Spears kissing moment from whatever awards show that was at. She wanted Mily Cyrus to kiss her at the Teen Choice awards last week. Okay, I just Googled to see why I remembered the Madonna lesbian kiss being a threesome and to see what awards show it was at. The answer is the VMAs and the kiss was Madonna kissing both Britney Spears and Christina Aguilera. How does Christina Aguilera get left out of that? But I digress.

So anyway Katy Perry said she wanted to do a stunt like the Video Music Awards one with Disney’s Hannah Montana star Miley Cyrus. Miley Cyrus’ peeps issued a public response to this idea which can be distilled down to “ew, gross, no.” In more detail, Teen Choice Awards host Miley Cyrus told E Online‘s Marc Malkin that “[Katy Perry] sang on my record. So I think she’s kind of getting back at me, because she was doing harmonies and backgrounds.”

Okay, that was kind of unintelligible, but Miley Cyrus is only like fifteen-years-old. But Katy Perry is still left with the problem of who to do a lesbian publicity stunt with now that Disney’s teen queen rejected her advances. According to my usual primary source for pop culture factoids, The Jesus Blog, Katy Perry found “that because singing about Christ did not bring riches and fame she has decided to sing about sensationalism and pull publicity stunts in order to be known.” Yep, you heard it here first (unless you read The Jesus Blog or are, ya know, very informed about Katy Perry), Katy Perry started off as Katy Hudson, singer of Xtian pop rock.

Posted by Amelia G on August 12, 2008. Filed under Blue Blood. You can follow any responses to this entry through the RSS 2.0. You can leave a response or trackback to this entry
Tags: amy-lee, bicurious, britney-spears, christina-aguilera, coal-chamber, evanescence, katy-hudson, katy-perry, kiss, lesbian, madonna, miley-cyrus, mtv