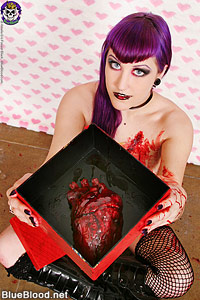 The ancient Romans celebrated Lupercalia on the Ides of February by whipping hot girls with portions of sacrificed goat. (The Ides is the 15th day of a month, for those of you who have repressed your Julius Ceasar studies.) Historians can’t agree on the origins of Lupercalia or precisely which gods the festival honored. They are pretty solid on the format for the party though. If you wish to throw a Lupercalia event, you will need a variety of eligible maidens, two goats, and a dog. The idea is to sacrifice the animals and then hit the girls with pieces of them in order to ensure fertility, painless childbirth, and general sensuality. A match-making lottery is optional but considered to be part of the tradition. Sort of the bloody pagan version of a 70’s key party. Blue Blood is not really down with the animal sacrifice portion of the show because we love our dogs and goats far too much for that.

In non-ancient Roman and non-70’s times, having an unusual piercing or wearing your lingerie in public can mean that your love life is limited to brief conversations with strangers off MySpace you message for 2am threesomes. But it doesn’t have to. There is no rule that thinking for yourself, owning your sexuality, and dressing flamboyantly equals eschewing all sentimentality and always feeling alone on Valentines Day. So I’m thinking I know more people who celebrate Valentines Day than Lupercalia. 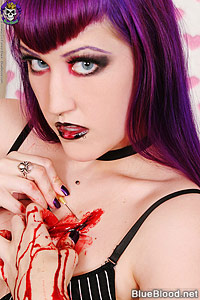 Historians appear to be even more confused about the origins of Valentines Day than they are about the origins of the older Lupercalia. There are three different dudes various factions present as being the patron saint of romance. Most folks these days celebrate Valentines Day February 14th with hearts and flowers and, of course, sentimental greeting cards in both digital and paper form. Some scholars argue that the match-making lottery tickets of Lupercalia were the first Valentines. I feel that a date lottery ticket is no more a Valentine than the keys to some guy’s Porsche (unless maybe I got to keep the car.) The medieval Xtians appear to have come up with a variety of different mythologies and rituals in attempts to co-opt and dilute the pagan Lupercalia rites. Difficult to discern which one was the most successful, but, by the 1700’s, it is well-documented that there was a thriving Hallmarkian industry which created pre-made cards for Valentines Day and produced books with suggestions of how to express one’s love.

So flowers are pretty and an obvious gift, but how did hearts get associated with Valentines Day? Cadbury, founded in 1824, is credited with producing the first heart-shaped box of chocolate. Perhaps it is because of the way one’s heart beats when aroused or in love. Not that a heart shape is shaped much like a human heart. There are vaguely disgusting treatises on how what we consider to be heart-shaped is more similar in structure to a cow’s heart than a human heart. I’m not sure if those who study this are proponents of cattle-fucking or what.

Whether you prefer pieces of sacrificed animals or pieces of chocolate, there is someone out there who is the perfect match for you. If you have already found them, Valentines Day is the perfect holiday to celebrate your good fortune. As part of Blue Blood’s Valentines Day greetings to all of you, Forrest Black and I photographed a professional piercer, the lovely purple-tressed Natalie Addams, cutting out her own heart, gift-boxing it, and sewing up the “wound” with quite genuine play piercings. The Cadbury chocolate boxes of the mid-1800’s were made with velvet and mirrors. So we just had to say Happy Blue Blood-style Valentines Day with a bloody heart in a spooky ornate gift box! We’re traditional like that.

Posted by Amelia G on February 11, 2008. Filed under Blue Blood. You can follow any responses to this entry through the RSS 2.0. You can leave a response or trackback to this entry
Tags: bestiality, bloody, chocolate, flowers, haircuts, heart, hearts, lupercalia, myspace, natalie-addams, romantic, roman_legions, tattoo, Valentines-Day