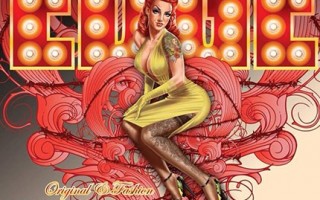 
Is it bad that when I read a headline like “Nearly-nude woman accused in meat heist” and see a hot tattooed brunette girl’s mug shut, my first thought is whether I know her? The story in the Wasau Daily Herald by intrepid reporter Carolyn Tiry tells the tale of a woman who was stopped by […]


I am normally not a fan of these human LOLcat things, but OMG. I remember when I used to think certain kinds of tattoos were soooooooooo sexy. I loved both really blatant in-your-face ink and really secret tattoos. I enjoy people who make a scene and I also liked the idea of people having more […]


Readers were first introduced to Lisbeth Sander in 2004. She was the main character in a trilogy of books known as the “Millenium series”, written by Swedish author, Stieg Larsson. Lisbath is the female protagonist of the series, where she is widely known for her unusual appearance. Lisbeth is very thin, with short, black hair, […]

- by Amelia G in Music, Trade/Business


Moses Avalon reported: In a surprise move yesterday CitiBank, who is in receivership of EMI/Capitol Records, after its parent company Terra Firma defaulted on their loans earlier this year, put the Hollywood landmark, known as the Capitol Records Building up for sale. Kodak announced the roll-out of photo tattoos. These work much the way T-shirt […]


So today is supposed to be Blog Day 2010. BlogDay founder Nir Ofir has been doing this since 2005. The idea is for bloggers to post links to five disparate blogs which are culturally alien reads. Each BlogDay post August 31, 2010 is supposed to be tagged as BlogDay2010. Bizarrely, this year, Technorati shows not […]