Shamrocks and Leprechauns and Green Beer 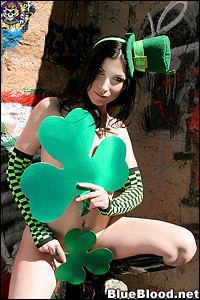 As a holiday, St Patrick’s Day has dubious origins but fabulous iconography.

Although the holiday tends to serve as both an expression of Irish pride and an excuse to get thoroughly blotto (Hi Funkatron), the origins of Saint Paddy’s are neither in drunkenness nor Ireland. Although observation of the holiday in the Americas was recorded as early as 1737 in Boston, the first serious St Patrick’s Day parade took place in New York City on March 17, 1762 as a celebration for Irish soldiers in the British military. That would be the British military whose asses we kicked in order to become a sovereign nation and pursue happiness and freedom and stuff. Nonetheless, over the years, the St Patrick’s Day parade in New York City grew into a bigger and bigger event. A lot of the first Irish immigrants to the New World were Protestant, but the 1845 Potato Famine lead to an influx of Catholic Irish population. Although grisly prejudice against the Irish in general and the Catholic Irish in particular lead initially to negative media coverage of the parade, when President Harry Truman attended the festivities in 1948, many people felt that prejudice was really something that the US of A was finally putting behind it. This was perhaps overly optimistic, but still a step in the right direction.

Actually in Ireland, St Patrick’s Day was celebrated as a religious holiday, even though St Patrick was a pretty lame saint. Patrick was essentially a trust fund baby from the 400’s. He was kidnapped from his parents’ estate and held captive for six years, during which time he, go figure, got kinda religious and started hearing voices. When he escaped, he is said to have walked 200 miles to freedom in England. He studied religion there for many years, before returning to Ireland to minister to Christians already practicing there and to work on converting pagans. Some accounts credit him with introducing Christianity to Ireland, but this has been pretty resoundingly debunked. He is, however, credited with thinking of dressing Easter up with Pagan rituals to make it more appealing to those he was trying to influence to convert. There is also some stuff about banishing snakes from Ireland, but it is sort of silly and also considered by most to have been debunked.

The thing about St Patrick’s Day being a religious holiday in Ireland was that this meant all the pubs were closed. This was not relaxed until the 1970’s. Not a lot of consumption of green beer going on there. That was a strictly American and primarily New York, err, tradition. In 1995, the Irish government decided that, if anyone was going to have a killer St Patty’s Day party, it should darn well be them. Pretty reasonable really. Ireland upgraded it from a “Day” to a “Festival” and now puts on four days of merriment, enjoyed by an estimated 1.2 million revelers at last count.

I went to high school in Germany for a year and every German holiday is an excuse reason to get tipsy in the street. So I feel I can safely say that I might enjoy the modern Saint Patrick’s Day Festival in Ireland, except that a lot of traditional music sounds like filking to me. I realize that filking is actually based on folk music, and not the other way around, but the discomfort lingers. SF fans will know what I am talking about and, if you are not familiar with filking, trust me, you do not need to be.

Leprechauns are also based on Irish folklore, but they were not associated with Green Beer Day until 1959 when Disney released the movie Darby O’Gill & the Little People. Somehow the Irish heritage aspect of St Patrick’s Day meant that leprechauns and their tricky pots of gold then got to be thought of as part of the holiday as well. It really seems like I should be kidding at this point, but I’m not. Makes you wonder what weird future impacts modern media will have on world celebrations.

Oh, and the shamrock? Yeah, the first recorded mention of one was around a thousand years after the death of Saint Patrick. The shamrock or seamroy was sacred at the time as a symbol of the rebirth of spring. The utilization of the shamrock in a Christian holiday is another example of the co-opting of Pagan culture, but not one which is apparently directly attributable to Saint Patrick. The meaningful clover symbol was later further co-opted for Irish pride under English oppression.

So . . . Happy St Patrick’s Day and enjoy your green beer. (The original color associated with the holiday was blue.)

Posted by Amelia G on March 17, 2008. Filed under Headline, Images, Oddities, Trappings. You can follow any responses to this entry through the RSS 2.0. You can leave a response or trackback to this entry
Tags: beer, irish, party, saint-paddy, saint-patrick, shamrock, shamrocks, st-patricks-day, trust, trust-fund-baby