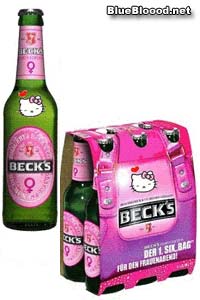 It has been reported far and wide that the most recent Hello Kitty license deal is with Beck’s Beer. Now Hello Kitty puts their cute characters on a remarkable variety of products. The Hello Kitty vibrator jumps to a lot of pervy minds, but you can also get everything from a Hello Kitty umbrella to an embossed Hello Kitty soup pot to boil your ramen in. So it is plausible that there would also be a Hello Kitty brand beer deal. Beck’s is not my favorite beer, but it is decent and I favor the pilsner of the various Beck’s brews.

Unfortunately there appears to be some evidence that Blingee or a similar online design service was used to mock up art for what appears to be a six plus one of Hello Kitty Beck’s beer. Which is too bad as Hello Kitty branded booze might make an entertaining party favor.

Anybody have any idea whether Hello Kitty beer is a fictional fantasy or an actually available Sanrio item for purchase?

Posted by Amelia G on June 22, 2009. Filed under Blue Blood. You can follow any responses to this entry through the RSS 2.0. You can leave a response or trackback to this entry
Tags: art, becks, beer, bling, booze, fantasy, hello-kitty, kitty, sanrio