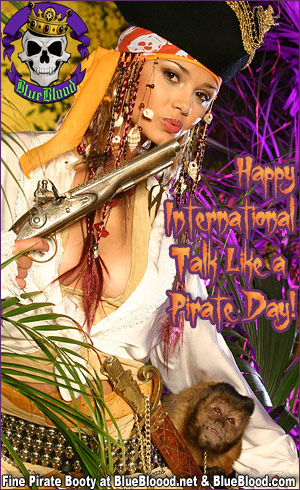 Yesterday, September 18th, I posted a Blue Blood countdown of the Top Ten Pirate Movies of All Time. I thought it was a fun round-up of flicks folks could watch to get psyched up for International Talk Like a Pirate Day today, September 19th. Some people got very worked up about the list and one person even tried to claim that the holiday’s roots come from the works of Bobby Henderson, founder of The Church of the Flying Spaghetti Monster. If you want to know some accurate history about Talk Like a Pirate Day, you can check out the Happy Talk Like a Pirate Day article I wrote for the holiday in 2007. The additional movie suggestions were legion, so I am, however, going to present a few more flicks my pals from the Blue Blood boards, LJ, and elsewhere suggested. Just in case you don’t have enough pirate movies to watch today yet.

Sinbad — Blue Blood boards member Skully pointed out that I had not mentioned Sinbad and reminded me of how awesome the claymation in that was when it came out. I actually thought that movie was totally kickass when I was a kid, but I can’t seem to find the version I saw on IMDB. In fact, I can’t find any claymation Sinbad movie on there at all. I sort of thought the title had to do with the Seven Seas and there are entries with that title, but none which appear to have the sort of special effects that I recall. Please note that I am not hallucinating claymation pirates because Skully remembers the same movie.

Treasure Island, Return to Treasure Island — Treasure Island is, of course, a classic. I did not include it in my initial list because I am a book snob and believe that, in all cases except Fight Club, the book is probably better. I generally think filmmakers should write for their intended medium. I often like cable television shows inspired by books, but I rarely like straight movie adaptations. And, even when the movie is good, the book is generally better.

Muppet Treasure Island — Blue Blood boards member Jonny Angry was the only one to suggest Muppet Treasure Island, but I’ve gotta give it up for the puppets. Jim Henson’s progeny were ably assisted by the ever-popular Tim Curry and the absolutely fabulous Jennifer Saunders in this 1996 extravaganza of felt.

The Pirate Movie — The Pirate Movie was also suggested. When this movie, starring teen heartthrobs Kristy McNichol and Christopher Atkins, came out in 1982, the general population did not have cable television or the internet yet, so soft core porn could go far. Actually, I have no idea how far the movie went literally because my parents were of the firm belief that all movies containing Kristy McNichol also contained unsuitable material for minors. Despite the fact that my brother went to kindergarten at Rye Country Day School with Christopher Atkins’ brother Peter Nebauer, I was never allowed to see anything with Christopher Atkins in it either. To this day, I have never seen Blue Lagoon. Maybe if someone starts a Talk Like a Shirtless 80’s Guy Day, I’ll have to do a mini film festival.

The Princess Bride — I’m only mentioning this 1987 study in weak females in film because so many people brought it up. But The Princess Bride absolutely does not count. The book was better and they made a previously cute guy, Cary Elwes, grow the world’s stupidest mustache.

The Goonies — A number of people suggested The Goonies. Although there were pirates in that movie, it is not a pirate movie per se, but you can certainly re-watch it, if you are out of Douglas Fairbanks and Errol Flynn.

We’ve got our own pirate booty babes galleries posted on BlueBlood.net here today. Pirate Wench Adriana is lensed by Roman Sluka and BlueBlood.com members get to see the whole set. Ditto for Pirate Wench Lenka who appears in our little Happy International Talk Like a Pirate Day banner above. The Gypsy Curse font is by illustrator Chad Savage who has periodically worked with Blue Blood on design and drawing projects for many years.

Would you like to place this Talk Like a Pirate Day greeting on your site or on your friends’ profiles?

You can copy the code below and place the image right on your own site or LJ or XPeeps or MySpace or other profile to wish everyone a Happy International Talk Like a Pirate Day: