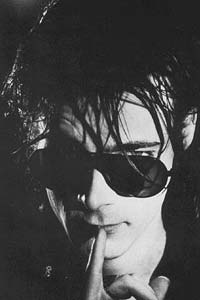 The Sisters of Mercy will be playing The Music Box at the Henry Fonda Theater in Los Angeles on Tuesday, December 2nd, 2008. Read on to find out how you can win tickets courtesy of GoldenVoice and Blue Blood.

In the same way perhaps that Guns n’ Roses is essentially Axl Rose at this point, Sisters of Mercy is essentially Andrew Eldritch. Having different collaborators on different Sisters albums gave different ones slightly different feels, but I personally enjoy the music on all of them. I even liked Vision Thing when all my unsavory pals derisively referred to it as the “Sisters Metal Album”. (I maintained that the Egyptian iconography on the cover made it totally gothic, but whatever.)

My friend Jeanne has been emailing me nostalgic photos recently and this made me think of of an amusing related anecdote. Uncomfortable with the goth label, Sisters of Mercy has tended to tour with potentially incongruous acts. So Jeanne and I were at some stadium show. I don’t recall all the acts on the bill, but the arena was probably the New Haven Coliseum or the Hardford Civic Center. This was pre-internet, so she and I were really enjoying the people watching and deconstructing the different tribes which had come out for the various bands playing. And looking for cute boys. So Jeanne spots this totally hot guy with dark hair and pale skin, a type we both favored, and she grabs me to point him out (I’m the forward one), only the guy disappears into some door and we can’t figure out quite where.

Eventually Jeanne figured out that she had been scoping out Sisters frontman Andrew Eldritch. Apparently he had managed to walk around the arena hallways unrecognized, simply by not wearing his trademark sunglasses. Absolutely classic when one can be incognito by taking the sunglasses off.

I’m sure Andrew Eldritch is a difficult man to like in real life, so probably for the best. Sometimes you have to love the art and not the artist. Now I realize that Andrew Eldritch has repudiated the goth label, along with his former music label, bands who wanted to support him, and a laundry list of former bandmates. I find it really tragic that things went this way for someone who could create such consistently brilliant music and intriguing lyrics. I know genius is often tortured and alienated. I have days when I feel stabby too, but I try not to interact too much if I’m feeling like lashing out at everything around me; that feeling is nature’s way of saying to take the day off. I admit that I didn’t create art for years because a junior high art teacher was mean to me, but, in my defense, I was in junior high at the time. The Sisters of Mercy haven’t had a proper new album in years because Andrew Eldritch was on strike because he didn’t like his record label and hasn’t landed with a new one since breaking up with East West.

Word is, however, that you can hear new Sisters material at a live show, so I’d expect to hear some new music in the mix at The Sisters of Mercy show at The Music Box at the Henry Fonda Theater in Los Angeles on Tuesday, December 2nd, 2008. If you want to win a pair of free tickets, either post in this thread or message privately here or on MySpace or VF. Your post or message should include a personal anecdote about Sisters of Mercy, such as the one I told about me and my friend Jeanne, or your thoughts about the band or one of their songs. Basically, talk about something related to Sisters of Mercy and the most entertaining anecdotes or insights win free pairs of tickets to the Hollywood show.

Posted by Amelia G on November 27, 2008. Filed under Blue Blood. You can follow any responses to this entry through the RSS 2.0. You can leave a response or trackback to this entry
Tags: andrew-eldritch, axl-rose, goldenvoice, goth, gothic, guns-n-roses, hollywood, internet, metal, nostalgic, sisters-of-mercy, stabby, sunglasses