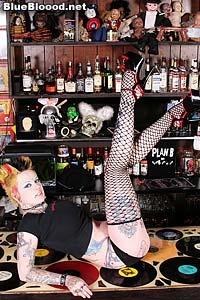 Happy Repeal of Prohibition Day! So a Dewar’s ad pointed out to me that we should all celebrate the Repeal of Prohibition on December 5. I thought to myself that that was a great idea, but wondered if it would catch on. On December 2nd, Fleshbot did a feature on December holidays which included a New Years photo Forrest Black and I shot of Miss Bunny and which also put “December 5: Repeal Day: The 21st Amendment ends Prohibition” in their sexy calendar.

I got drunk for the first time at the Baptist Mission in Israel. Yes, the Baptists send missionaries to the Holy Land and so does everyone else. And my friend Elisabeth Bjerreaugaard-Pederson (who I would love to find me via Google) and I thought some of the missionaries’ kids were hot and so we drank with them, having no idea what we were doing. I got my real drinking merit badge drinking with Marines in Germany at age sweet sixteen. Blue Blood is sweet sixteen now, but Blue Blood has a curfew. Unlike sixteen-year-old me. To be honest, I’m a fan of water and, although I enjoy going drinking very occasionally, I feel the most important thing about today’s holiday is the celebration of freedom. I just don’t like being told what to do in my personal life and the Repeal of Prohibition was a win for personal liberty.

I thought it would be fun to celebrate the day with (besides drinking of course) some free sexy barroom photos Forrest Black and I shot of Rachel Face. I seem to have spent a lot of time in bars with Rachel, sometimes shooting and other times drinking. One of the things I enjoy about her is that she always comes up with fun bars to shoot in or go to. 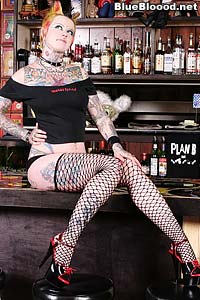 Blue Blood has been working with Rachel Face since 2001/2002 or thereabouts, but the most recent sets shot in 2008, were at a Portland gin joint called Plan B. Plan B is pretty much awesome incarnate. It is owned by punk bass player Jeff Truhn of Straitjacket fame and it has the best bacon dogs on the West Coast, maybe the best bacon dogs anywhere. The actual bar in the bar has all sorts of collectible records inset along its glossy surface. Apparently this was the hard lemonade made from a hard lemon of a breakup with the sort of punk rock girl who scratches all your favorite records on her way out the door. With today’s update, there are now 11 sets of Rachel Face available on BlueBlood.com in their entirety.

A bit of history for the history buffs not already viewing Rachel Face in the buff. (Sorry, I loathe puns . . . except for sex puns. We all have our foibles.) On December 5 in 1933, Americans got back the right to legally sell and drink alcohol. During the period from January 16, 1920 to that date, some of the saloon culture, the so-called drys were up in arms about, did decline. Drys was the slang of the time for teetotalers, axe-wielding beer barrel smashers, and other temperance advocates. Strangely there was (and purportedly still is) a Prohibition Party, so the temperance movement could run candidates likely to oppose the sale and consumption of demon rum, alcohol, booze, intoxicants, alky, canned heat, cocktails, drinky-poos, firewater, beer, hard stuff, hootch, moonshine, whiskey, rotgut, sauce, spirits, tipples, tequila, hot juice, that sort of thing.

In all fairness to the drys, there had been more saloons than the population needed and the law of supply and demand forced saloon-keepers to maintain sidelines in girls, gambling, and other mind-altering substances. Not that the more profitable early saloons did not also feature such things, but there was a feeling in America than the problems were getting worse by 1919. At the same time, during Prohibition, more traditional drunkard customs were replaced by the world of the speakeasy. Speakeasies tended to draw previously respectable types into a more criminal and more sexually open environment. And of course Prohibition made a lot of wealth move around, most notably out of the government’s pockets and into a few bootlegging families everlasting fortunes.

So have a drink today to celebrate freedom of vice and pursuing happiness and making money the American way.

Posted by Amelia G on December 5, 2008. Filed under Blue Blood. You can follow any responses to this entry through the RSS 2.0. You can leave a response or trackback to this entry
Tags: bar, barroom, beer, blue blood, drunk, jeff-truhn, miss-bunny, plan-b, prohibition, rachael-reckless, rachel-face, repeal-day, sexy