To celebrate Repeal Day 2012, we have a SFW sample photo gallery of beautiful deathrocker Razor Candi tippling Absolut vodka. I assume that the booze industry made up Repeal Day some time in the past few years. I first saw it in a Dewar’s advertisement, but I admit that I think celebrating the end of a dumb policy — i.e. Prohibition — is a good idea. 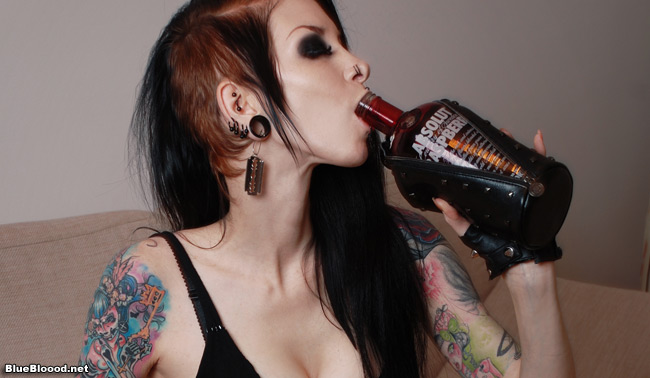 Here are some of the most fun quotes of the day for Repeal Day 2012:

Once, during Prohibition, I was forced to live for days on nothing but food and water.

On this date 79 years ago, prohibition ended. Do your American duty and drink like a fish tonight. I already have

Are you celebrating #RepealDay with a bourbon? You should. Jim Beam had his distillery up & ready 120 days after prohibition ended.

GNA Garcia quoted our USA president of the day:

“What America needs now is a drink.” ~ Franklin D. Roosevelt, on the repeal of Prohibition. Happy #RepealDay America.