I live in the heart of Hollywood and there is tons of commercial space for rent here right now. I am surprised at how many places have been trying to get a tenant without success for as long as they have. Except that places which have been empty for literally years still have asking prices of around four grand for teeny square footage. I’m sure there are tax advantages or something to keeping the prices artificially inflated above what anyone will pay. Only there is an exception to the nobody-will-pay-that rule: Farmacies. There are new establishments with green crosses popping up all the time. As near as I can tell, the legalization of medical marijuana in California is pretty much the only thing supporting commercial real estate in Los Angeles right now.

I remember when I first started reading Raymond Chandler, it always sort of took me out of things when some character was pissy about Marlowe drinking alcohol. Prohibition seemed like such a distant quaint concept that it was hard to imagine anyone being surprised or disapproving of a drink years after it ended. It is kind of funny that I still jump a little when people smoke pot openly in public. Sure, not everyone who does probably has a prescription, but it is awfully close to generally legal in California now. There are doctors who advertise on billboards that a visit with them will only run around forty bucks and they will prescribe cannabis if they feel the patient will benefit from it. I’d like to point out that it is not harder for someone who went to medical school to examine a patient long enough to prescribe pot than to prescribe Zithromax. But guess which one is covered by insurance and which one costs more.

I apologize. It is odd that there is an unusual level of turmoil at this time this year and looking at my 2012 420 post, I wasn’t really feeling up to writing something humorous but staunchly favorable on this political issue last year either. I am utterly uninterested in every trying marijuana myself, but I’m always happy to photograph beautiful counterculture babes smoking weed. Sometimes you just need to put your mind to cute puppies and hot girls and other pleasant topics to think about. Ms. Poisoness is our 420 girl for 2013 and she has the most kickass collection of paraphernalia and gear ever. Her 420 panties will put a smile on your face, they are so cute on her. Plus she has a happy tie-dyed sheet she has had since her teens and more pipes than you are likely to see outside a glass store. You can see free Ms. Poisoness 420 pics in our special teaser gallery here or view the whole naughty shebang in the Blue Blood VIP. Also, spoiler alert: She smokes naked. 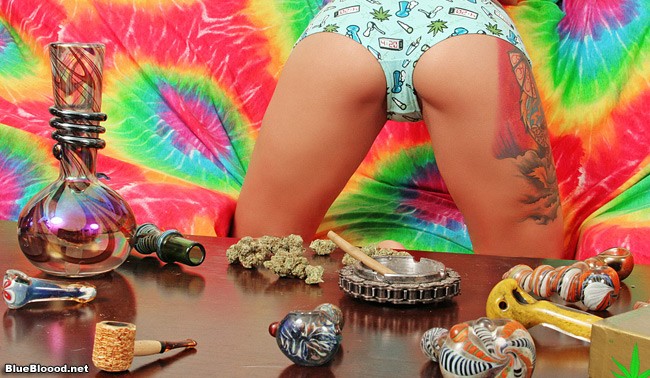 Posted by Amelia G on April 19, 2013. Filed under Happenings, Headline, Images, Manifesto, Trappings. You can follow any responses to this entry through the RSS 2.0. You can leave a response or trackback to this entry
Tags: 420, alcohol, blue blood, california, counterculture, hollywood, insurance, marlowe, medical marijuana, ms poisoness, paraphernalia, prohibition, puppies, raymond-chandler, zithromax