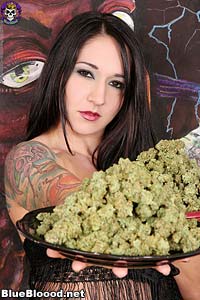 For the non-Californians amongst you, Humboldt County is an area in California which is sufficiently north of San Francisco that it might as well be hippie Oregon. And the November ballot here in California is going to have a referendum on whether marijuana should be entirely legalized and not solely legal for those with a prescription. Part of the idea is to tax marijuana to help California’s sagging State coffers.

Kevin Drum at Mother Jones reports that part of the concern is that a black market supports farmer profits and Big Tobacco will just snarf all the market share, should pot be legalized. Sam Quinones at the Los Angeles Times reports that wholesale prices for cultivated cannabis have dropped 25% just since the farmacy legal medical marijuana dispensaries have proliferated. The LA Times says, “Humboldt State economists guess that marijuana accounts for between $500 million and $700 million of the county’s $3.6 billion economy.” Apparently, in harvest season, part time marijuana trimmers seasonal help can make $25 an hour, to supplement their usual work. That is a lot of money in the current economy.

So basically we are going to get what folks got in trade for the last Depression i.e. a bunch of New Deal stuff which only takes care of some people and the government can’t afford and an end to Prohibition so we don’t care. I’m in favor of legalization and I am very very in favor of medical marijuana. But I am suspicious of a government giving up on fixing the economy and just hoping everyone is too stoned to be bothered about shrinking wages, job markets, cottage industries, big industries, and pretty much every other American economic institution folks use for the productive pursuit of happiness.

Posted by Amelia G on April 9, 2010. Filed under Blue Blood. You can follow any responses to this entry through the RSS 2.0. You can leave a response or trackback to this entry
Tags: 420, boing-boing, california, depression, humboldt county, kevin drum, la times, marijuana, mark-frauenfelder, medical marijuana, mother jones, new deal, pot, prohibition, pursuit of happiness, sam quinones