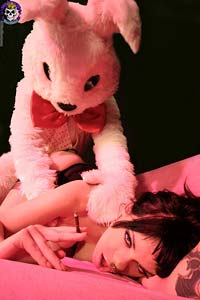 Politico reports that yesterday the Arizona state legislature has passed a bill making it a felony to “intentionally or knowingly creating a human-animal hybrid.” Well, phew, because I was definitely afraid, with all the military contractors out there, that, instead of working on lucrative mining and fiberoptics, mad scientists were diligently slaving away trying to create commercially useless human-animal hybrids. Aside from Annette Edwards, who might want to marry a human-rabbit hybrid, is there really a market for such things?

I realize Arizona has recently passed legislation making it legal to do live reenactments of World War II movies (Show me yahr paperrrrsssssssss!) and they have taken an important stand against the creation of werewolves. Plus Arizona doesn’t practice daylight savings time (which is inconvenient for people phoning from other states, but otherwise awesome). And Arizona not only doesn’t recognize so-called gay marriage, but passed a state constitutional amendment banning it, just to be safe (which is unbelievably evil and I don’t get why we don’t just call it marriage and not “gay marriage”). Arizona also has some gun laws paying tribute to its Wild West heritage (which I kinda like, but totally understand why reasonable people would dislike.)

So I get it. Arizona is maverick. Arizona marches to the beat of its own tom-tom. (Maybe some of those Native American museums in Arizona should also start asking for some details about who got to the United States of America exactly when.) But does Arizona seriously need a law on the books against having humans trying to create babies with sheep? Isn’t one of the reasons a man fucks a sheep to avoid any concerns about paternity?

What about Frankenstein monsters and vampires and zombies? Does anyone know if Arizona is putting the slightest effort into making sure no scientific researchers are trying to raise the dead?

Posted by Amelia G on April 30, 2010. Filed under Blue Blood. You can follow any responses to this entry through the RSS 2.0. You can leave a response or trackback to this entry
Tags: annette edwards, arizona, dead, gay, gay-marriage, guns, mad scientists, maverick, monster, monsters, museum, research, vampire, vampires, werewolf, werewolves, zombie, zombies