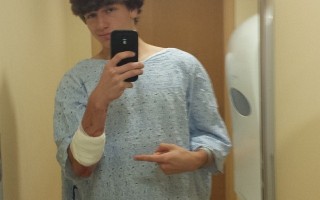 
Nancy A. Collins is probably the most influential living author of vampire novels. I was a big fan of her work before I founded Blue Blood and she was kind enough to sell me multiple short stories, when I was just starting out. If you’ve ever played any game from White Wolf, her work had […]


So they are rebooting The Crow franchise. Watchmen (and forthcoming Ninja Scroll) screenwriter Alex Tse seems like a reasonable choice. But Bradley Cooper? I mean, I think he is great. I loved The Hangover. But I’m just really really not seeing Bradley Cooper as Eric Draven. Bradley Cooper is a good-looking guy, of a flavor […]


kaRIN and Statik from Collide are very excited their song “Slither Thing” will be used in this week’s upcoming episode of True Blood, the second episode of the new season. I believe KCRW radio DJ Gary Calamar is still the music supervisor for True Blood and these sorts of music choices are just one of […]