My Backstage Passes anthology has been receiving some nice press this week, so I thought I’d share. I’m so used to the speed of internet press at this point, that I am chomping at the bit with the turnaround time for print and for a project which requires more in-depth reading for journalists to cover it.

Kitty Two, writing for AltPorn.net, described much of the Backstage Passes book as “extremely enjoyably depraved and romantic”.

“Backstage Passes,” an anthology of erotica written by and about the types of people you might see alternately sobbing or fighting in the front row of either a Danzig or Dead Can Dance concert, is itself a time portal through which we can see a simpler time. Yes, though 1990 still had AIDS and condoms, not one of the characters in this book, be they rock star, hermaphrodite, loser, or part-time lesbian bass player, ever Tweets, Googles, or LOLs . . . “Backstage Passes” is a reissue, so the occasional datedness is often charming. Not only that, but every story (save for the last one), has at least one very useful sex scene in it. Read it and Douglas Coupland’s “Microserfs” for a complete picture of a more innocent time. 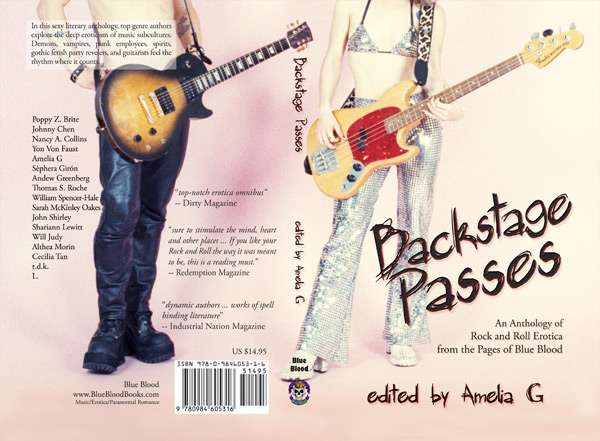