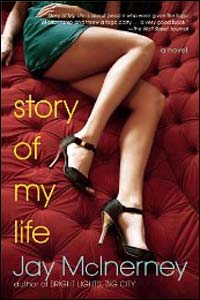 Because Rielle Hunter was the interviewee, I watched Oprah on TiVo last night. It was only my second time watching Oprah because I’ve always believed that she was one of those things like chick lit which turn women into the weaker sex. I think I’ve been mistaken on this because, in point of fact, Oprah is an impressive nuanced interviewer, with a brilliant balance of coming across compassionate enough for her subjects to reveal themselves, without seeming like she is ever just giving someone a pass for bad behavior or opinions either.

The obvious question, when someone like John Edwards betrays his marriage in a way which is so dangerous for his career, is why, even if he was unhappy, why? I was interested to see how Rielle Hunter came across on Oprah because she is obviously a set-the-world-on-fire compelling woman. I know most of the country is interested in Rielle Hunter (if they are interested in Rielle Hunter) because of her affair (and possible sex tape) with presidential candidate John Edwards. I must confess, however, that my interest is as a huge Jay McInerney fan.

Before he was a famous novelist and short story writer, Jay McInerney was a remarkable New York city scenester who cut quite a swathe through society, literary, nightclub, and fashion circles with his very successful womanizing. He is currently on his fourth marriage, this time to Anne Randolph Hearst, one of the heirs to the Hearst fortune and publishing empire. While Jay McInerney has stated on many occasions that he appreciates the vibrancy of New York city life because it provides inspiration for his writing, most of the many women he romanced were not immortalized in literature. After dating Rielle Hunter, however, Jay McInerney based Alison Poole, the star of my favorite of his novels, Story of My Life, on her. Alison Poole was also loaned to Bret Easton Ellis to be a character in American Psycho and Glamorama.

I went through a time period where I compelled all my female friends to read Story of My Life. I only quit doing so, once woman after woman asked me if I was trying to make some kind of fucking point, when I just loved the book and thought it was an uncommonly real portrayal of how women I tend to hang out with think and act. One of the reasons I dislike chick lit in general is that I feel it grafts weird desires for shoes and chocolate onto otherwise normal women. Not that I identify with Rielle Hunter or think anyone I know is specifically like her precisely.

For one thing, most of the women I know would be careless enough to make a sex tape with a powerful and vulnerable man and would not be careless enough to have totally unprotected sex 100% of the time. In the Oprah interview, Rielle Hunter confirmed that she and John Edwards made a sex tape (for their own personal private use) and that they never ever used birth control. (Rielle Hunter is also credited by many social media experts as being an early adopter of viral YouTube video promo in politics, but there was no mention of this in the Oprah interview.) There is a scene early in Story of My Life where Alison Poole tells her doctor, after getting an antibiotics prescription for an STD:

“… but I have to take these antibiotics for two weeks and not sleep with anybody in the meantime. I go, two weeks, who do you think I am, the Virgin Mary? and she goes, as your doctor I think I know your habits well enough to know what a sacrifice this will be for you, Alison. Then she gives me the usual about why don’t I make them wear condoms and I’m like, for the same reason I don’t fuck with my clothes on, you can’t beat flesh on flesh. I want contact, right? Just give me direct contact and you can keep true love.”

At the time, Rielle Hunter’s name was Lisa Druck and Jay McInerney did call her Alison Poole, but the main storyline is about her dealing with the insurance fraud murder of her horse Dangerous Dan. Some years after Story of My Life was published, there was a big scandal when the FBI became of the opinion that Lisa Druck’s prize horse Dangerous Dan was killed for the insurance money. So, given that Jay McInerney didn’t bother to change the name of the horse, I’m going to guess that he didn’t stray too far from the real life Rielle Hunter’s views on birth control. Not to say that the book is not fiction because Story of My Life is a great read and real life unedited makes for untidy un-literary storylines.

Jay McInerney’s most recent short story collection How It Ended: New and Collected Stories includes a piece called “Penelope On The Pond” which also features the character Alison Poole. In case anyone was wondering whether Alison Pool in Story of My Life was really actually based on Rielle Hunter, “Penelope On The Pond” is about Alison Poole’s time in limbo, while her presidential candidate lover is on the campaign trail. I’m sure it is not precisely accurate as a presentation of real life, but it is probably not a bad insight either. Certainly, watching the Oprah interview of Rielle Hunter, I was reminded of a number of specific lines in the “Penelope On The Pond” shorty story, which was published in 2009.