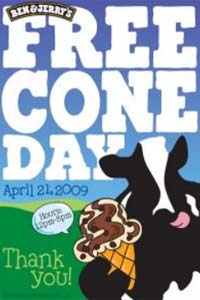 If you live on the West Coast like me, it is not too late to get free ice cream from Ben and Jerry’s today. Southern California has been having a crazy heatwave. I confess to worshiping at the alter of frosty central air conditioning, but I had to leave the house yesterday to get espresso beans for iced lattes and was stunned at how fast it has gone from chilly to insanely hot this year.

I guess this is the part where I should probably deconstruct the ways in which all strata of counterculture are marketed to disingenuously most of the time. I could talk about how people think there are these two hippies Ben Cohen and Jerry Greenfield who built an ice cream empire subsisting on a shoe-string budget, making strongly flavored ice cream according to their own personal quirky stoner tastes, and serving it in an old gas station. I could talk about the ferocious rivalry between Ben and Jerry’s and Häagen-Dazs and how Häagen-Dazs attempted to keep Ben and Jerry’s out of their distribution channels and Ben and Jerry’s repeatedly sued Häagen-Dazs and started a whole PR campaign with the slogan, “What’s the Doughboy afraid of?” If you are wondering where that slogan came from, the answer is that Häagen-Dazs is owned by Pillsbury, or at least was at the time, and Ben and Jerry’s was this indie force fighting The Man. Of course, Ben and Jerry’s sold to Unilever in 2000. The multi-billion dollar Unilever is the largest ice cream manufacturer in the world and owns, not only Ben and Jerry’s, but also Breyers, Popsicle, Slim Fast, Klondike, and dozens of European subs of Heartbrand. Hippie Ben and Jerry’s now are to corporate ice cream what marketing tool female mascots are to corporate so-called “altporn”, in that they make public appearances and do the occasional press junket, but it’s just for show and they don’t actually have any, ya know, business role in the company. Oops, I digress. I mean, FREE ICE CREAM!

Posted by Amelia G on April 21, 2009. Filed under Blue Blood. You can follow any responses to this entry through the RSS 2.0. You can leave a response or trackback to this entry
Tags: altporn, ben and jerrys, ben cohen, california, counterculture, espresso, free, haagen-dazs, hippies, ice cream, iced-latte, jerry greenfield, lattes, stoner, unilever