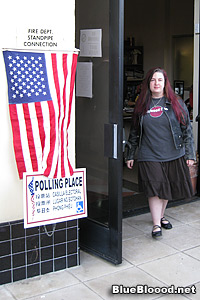 So I just got back from voting. I went to the polling place where I voted in the primaries and I wasn’t on the roster. They gave me a provisional ballot, but I find those things alarming. They also gave me a slip of paper with a list of phone numbers to call to find out what was up with my voter registration. I thought that perhaps my polling place had been changed to my work address from my home address or something like that. Basically, I did not want to submit a provisional ballot, if I could drive across town to another polling place and do a normal one.

The poll workers told me that I did not need to call because my vote would absolutely, definitely, no-question be counted. I called the registrar election day number anyway. A nice woman named Karen went over everything and told me that actually she couldn’t find me in the voter rolls. She gave me a more official State of California Registrar of Voters number to call and told me I should definitely call next week to get it all straight, but that it was doubtful I’d get through calling today.

I was literally shaking at the idea that my vote might not count, so I was going to be sitting in front of the polling place, with one eye on my ballot inside and the other on my finger hitting redial on my Blackberry, until I got through. There was no cell phone reception inside the polling place and it is illegal to remove the ballot from the polling location. Happily, the voice prompts and wait time for the California number were user-friendly and pretty prompt, given that it is election day.

Another nice woman named Whitney helped me this time and she told me that actually I was not currently active in the voter rolls because my registration was flagged for lack of birth location. I had changed something minor on my registration before the primaries, so there was a recent registration form, even though I’ve been voting in the same district for approximately eight years. I actually voted at the same polling place in the primary, but, at that time, they had not processed the new info on my new registration. Of course, I did fill out my birthplace when I registered again, but I was born overseas to American parents, so it is probably that whoever was doing the data entry just did not feel like looking up how to enter a European birth. At any rate, Whitney updated my information and activated my voter registration.

The significant thing here is that, because my registration had been flagged, my vote would not have been counted, if I had not gotten through to the registrar. So, for those of you with the polls still open, please call your local voting registrar, if there is anything off about the way you are or are not listed in the voter rolls. The poll workers will assure you that your vote will be counted, but it may take a little extra effort on your part for that to be true. Please make it.

As a bonus, lots of American businesses are offering presents for those who vote. Here are a few links to free stuff for Americans who perform their civic responsibility:

Ben & Jerry’s will give voters a free scoop of ice cream today between 5pm and 8pm. Krispy Kreme will give those with I Voted stickers a free star-shaped doughnut today. And from now until November 11, Babeland will give those with proof of having voted a free sex toy. Starbucks is giving away a free brewed coffee to anyone who tells them they voted. I don’t think they are requiring proof, like the other vendors, so I guess you can just claim to have voted there, but you really should vote and they do have a kind of inspirational commercial.

I’m going to be honest and say I love coffee, but I love an iced latte with organic non-dairy milk and artisan-roasted gourmet beans. The ice cream site has a nifty store locator feature right on the election promo page, but the nearest location is in the Valley and I’m in Hollywood. Also, I remember when everyone was excited that they opened one of those ice cream shoppes near my college and I found their ice cream overly sweet. One of my neighbors owns a doughnut shop across the street from where I live, so, if I feel like eating high carb and high glycemic index, I think I’ll just give him the few cents a doughnut costs. A sex toy seems like a better gift, but I get tons of cool sex toys free for product placements and reviews as is. So none of the free stuff is really jumping out at me.

I voted because it matters to me as a patriotic American to vote, because it is my responsibility as a citizen. And I did the follow-up necessary to make sure my vote would be counted for the same reason. I voted.

Posted by Amelia G on November 4, 2008. Filed under Blue Blood. You can follow any responses to this entry through the RSS 2.0. You can leave a response or trackback to this entry
Tags: babeland, blackberry, california, civic-responsibility, coffee, election, free, freedom, hollywood, patriot, patriotic, provisional-ballot, sex, usa, vote, voter, voters, voting