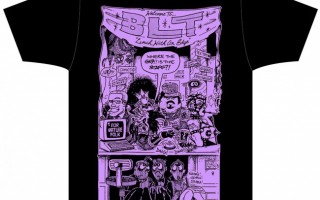 
I’ve always thought that the scent of certain foods should be packaged as cologne. Who wouldn’t want to lick someone who smelled like fresh doughnuts in the morning? Baked goods in general can provoke this sense. I find Mrs. Fields cookies uninteresting as a food, but they smell so damn alluring in the mall; I […]


So I just got back from voting. I went to the polling place where I voted in the primaries and I wasn’t on the roster. They gave me a provisional ballot, but I find those things alarming. They also gave me a slip of paper with a list of phone numbers to call to find […]

Dead Kennedys Too Drunk to Fuck


Last week, the Dead Kennedys announced an indefinite hiatus from touring, due to health issues suffered by bassist Klaus Flouride and drummer D.H. Peligro. Although I was fangirl-thrilled to meet East Bay Ray at a coffee shop a couple years back, I personally find it depressing when bands tour without key original members. A Jello […]