Tonight’s episode of Breaking Bad had some really great moments. I loved the parts where Jesse Pinkman is drinking black coffee out of the white DEA coffee mug and where Jesse is telling DEA Agent Hank Schrader and DEA Agent Steven Gomez that Mr. White is smarter then they are and luckier than they are. I thought Hank’s head was going to explode at the comparison. Actor Dean Norris is doing a great job of expressing the nuances of Hank’s competitive dick personality, where Hank’s motivation is much more from feeling like he has to reassert dominance over Walt and much less from identifying as his DEA agent job. I also got a kick out of the scene with Marie Schrader whining to her shrink Dave, and her main distress is just that she had Walt pegged wrong. I like where she is getting dangerously close to implying there is criminal activity Dave might have to report, but she keeps refusing to give him details . . . so, to change the subject, her shrink asks her how work is going, given that she was very upset about “the new parking policy” during their previous week’s session.

I think that Walter White is actually not ruthless, when it comes to people who he knew before he became Heisenberg. He doesn’t want to kill Hank or Marie or Jesse. When Hank is going over all the examples of things Walt has done for Jesse, Jesse is unconvinced that this means Walt cares about him and won’t murder him. When Jesse goes to the bathroom, Hank tells Gomez that he feels like it is win-win having Jesse wear a wire to talk to Walt under surveillance. If Walt blabs, that is helpful, and, if Walt shoots Jesse, then that works for Hank’s agenda as well.

It is tragic that people who are not stone cold killers are all telling Walter White that he needs to whack Jesse Pinkman. Skyler White acts like putting his in-laws in their place is basically just as bad as murder and Saul Goodman uses an unfortunate Old Yeller analogy. Incidentally, Old Yeller typifies why movies from the 1940’s are always better than those from the 1950’s. I guess Walt watches the same TCM I do because he is not into putting Jesse down, just because it seemed like the correct-if-sad thing to do to the rabid faithful puppy in an emotionally-exploitative movie from the middle of the past century. (When I was very young, some truly misguided adult told me that I should totally watch Old Yeller because I loved animals. But I digress.)

Jesse finally pushes Walt to give stone cold killer Todd a ring by threatening to hit him where he really lives. The thing is that where Walt really lives is his family. Walt loves his children and, for some bizarre reason, he seems to still care about Skyler. He wants them all to be happy and without need or want. Jesse probably means that he is going to attack Walt’s money stash, when he makes the threat, as Jesse doesn’t seem very pro-child-poisoning. 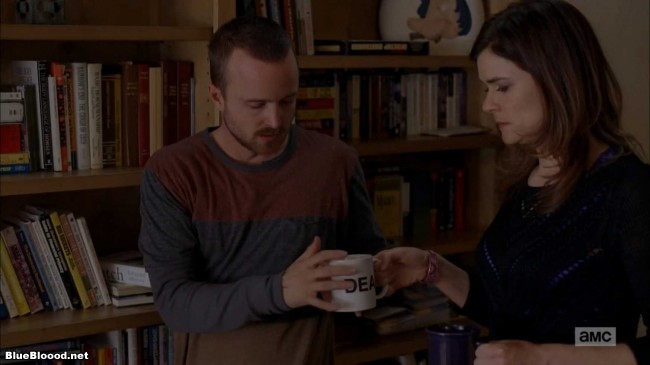 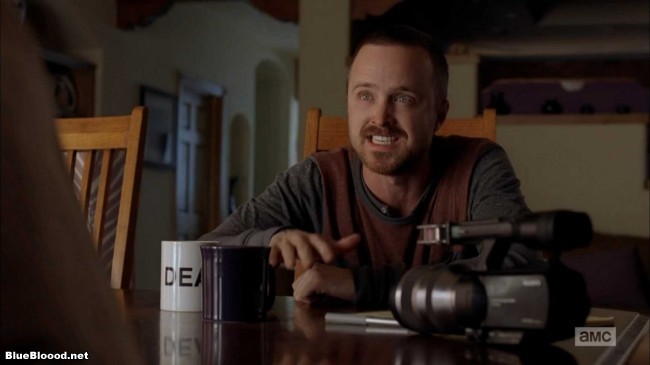 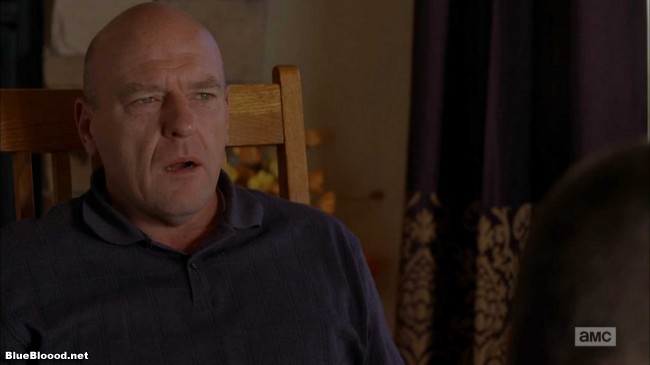 Episode 512: Rabid Dog
An unusual strategy starts to bear fruit, while plans are set in motion that could change everything.
Written by: Sam Catlin
Directed by: Sam Catlin

Posted by Amelia G on September 1, 2013. Filed under Headline, Popcorn. You can follow any responses to this entry through the RSS 2.0. You can leave a response or trackback to this entry
Tags: breaking bad, coffee, dea agent, dean norris, devil, dominance, hank schrader, heisenberg, jesse-pinkman, kill, murder, old yeller, saul goodman, skyler white, walter white is the devil