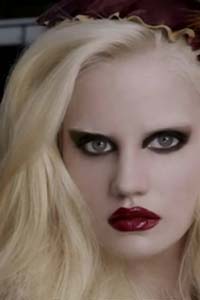 I once melted off various chunks of my hair because I wanted to have white stripes in it and was chatting with a friend while leaving 40 volume bleach in my hair extra-long. Parts of my hair were literally reduced to mush. Fortunately, I have thick hair to begin with and I was wearing it in stripes anyway, so it didn’t look as disturbing as it might have otherwise.

My best friend in ninth grade had naturally platinum blonde hair and I saw Heavy Metal that same year. Seeing white-tressed Tarna chopping off heads in her leather underwear was a formative moment for me. Whenever there is a real albino in a movie with humans (as opposed to cartoons), they often end up being a villain. I think the whole lack of pigment thing strikes some people in a primal off-kilter way which makes them associate it with danger.

Punk rock hairstyles are partially based on trying to evoke this response in others. I know, I know, you have a blue mohawk solely because you like how it looks, and you totally hate it when anyone stares at you in the street or when you frighten annoying passers-by or when anyone thinks it is sexy.

Maybe I wouldn’t have a thing for dangerously sexy if I hadn’t seen Heavy Metal when I did. But, not a lot of English language movies came to the theater in the country I was living in at the time, so I was going to go see whatever came through, whether it was an old movie or R-rated or even if it was a wretched doomed romance movie. I suppose, given that I still hate doomed love flicks, and I saw those at the same formative age, perhaps Heavy Metal is not wholly to blame/credit for my adult tastes. 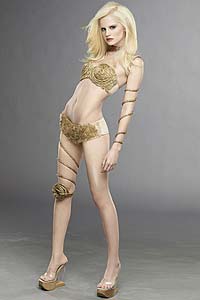 So I admit that I watched and enjoyed the first season of America’s Next Top Model where the cool sorta rivethead chick with the good work ethic won. I stopped watching ANTM some time during the second season when I suddenly realized that Tyra Banks was appallingly egocentric, sadistic, and disingenuous and wasn’t really trying to select a top model at all. How this took me until the second season I do not know. Maybe it is something about Tyra Banks. Many years ago, when Trya Banks was a big deal model but not yet a brand, a sibling of mine scouted her for his modeling agency while she was on a date with John Singleton. Without noticing that she was, ya know, already a model.

So ANTM has apparently made it to its thirteenth season now or “cycle 13”. I guess they do more than one season a year. Part of each season includes an episode where Tyra dominates the wannabes by forcing them to get disturbing makeovers they have no say in. A lot of people (well, a portion of the people who don’t have pay cable and thus watch The CW) are all in a tizzy because Tyra Banks had three of the contestants this year get bleached kind of albino, eyebrows included. 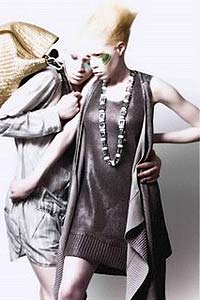 Now I think albino features are seriously hot, but why is Tyra Banks suddenly all about albinism? A couple of models currently making a splash include Shaun Ross and Diandra Forrest, both from the Bronx. If Shaun Ross and Diandra Forrest were from Tanzania, however, their lives would be much less fabulous. Albinos in Tanzania have been being hunted. Tanzanians have been systematically murdering albinos and chopping off their body parts to harvest for supposed medicinal or magical properties or maybe for fun. These sorts of creepy things are difficult to parse when they happen in an alien culture. I think of Tanzania as a happy place with interesting animals because my grandparents lived there when my grandfather was helping Tanzania learn to utilize their leather resources. (Yes, leather, the apple doesn’t fall that far from the tree.) But I guess it has its downside. Ugh. Anyway, the Tanzanian government announced this week that it will be getting tough on albino killers and hanging some soon. Hopefully that is a deterrent. Positive Exposure is an organization working to help the victims of albinism discrimination in Africa.

Anyway, I think white hair looks lot. And soon it may even be sort of in. I would prefer, however, that fashions I like come into style because of factors other than genocidal events. But that’s just me.

Posted by Amelia G on October 2, 2009. Filed under Blue Blood. You can follow any responses to this entry through the RSS 2.0. You can leave a response or trackback to this entry
Tags: albinism, albino, albino model, antm, bleach, diandra forrest, heavy-metal, leather, mohawk, mohawks, positive exposure, sexy, shaun ross, tanzania, top model, tyra-banks