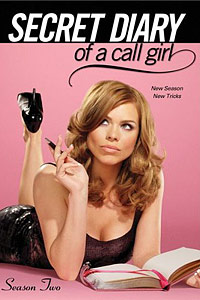 Some time ago, I wrote a piece about Secret Diary of a Call Girl, then airing on Showtime. This weekend, the writer of the book and blogs the show was based on came forward and unmasked herself. Rumor is that she decided to expose her true identity because some ex-boyfriend was shopping her story to the tabloids. She says she decided to out herself because it wasn’t much fun not being able to go to her own book release party for the recently released Belle De Jour’s Guide to Men.

Around this time last year, Belle wrote in her blog, “What I write about is something every depiction of prostitution in this country in recent years has not been permitted to say. There will be no comeuppance. There will be no guilt and shame. And most importantly, there will be no white goddamn knight . . . Myself, personally, I am enjoying life. Neither in spite of nor because of my past but because I choose to . . . because no one else wants to say these things, I can: I will. I am unrepentant. I make no apologies for my past or what I write. And my future will be no worse than yours as a result.”

It will be sociologically interesting to see how outing herself pans out for her future. So far, people’s reactions seem mixed. Because here is the kicker: Belle de Jour is a research scientist who specializes in the impact of pesticides on children, such as exotic cancers. So the people who were hoping best-selling author and high end escort Belle was pathetic in her real life are disappointed. And the part-time sex workers who hand themselves a blue ribbon and an award for having got through a few months of college are feeling a bit inadequate. There are exceptions, but a lot of the press on Dr. Brooke Magnanti seems sort of hostile, like they either have to refer to her research science as obscure or her sexual past as very very naughty.

My response: How fucking cool is it that someone could be hot enough to charge three hundred pounds an hour via Barbarella’s escort agency as a young woman and go on to be both a witty best-selling author and work on science to help sick children?! That is like female Buckeroo Banzai level awesome.

Yes, I’m probably biased, given that my first published glossy non-rock journalism was a feature for Hustler’s Chic about my experiences as a non-sexual escort. Belle’s overall takeaway was, “Let me state for the record that if being a man was easy, hookers wouldn’t exist. Fact.” and mine was more that what people are generally trying to buy from sex workers is different and more tragic than I’d thought. Not incompatible observations really. I had some interesting conversations with some of my 60,000+ most intimate friends on MySpace, after posting the article about Secret Diary of a Call Girl, and, no matter what the variety of sex work was, practitioners tended to get unusual insights into the human condition.

Belle de Jour a.k.a. Dr. Brooke Magnanti, however, did an entertaining and successful job of sharing her insights with the world. And she has a doctorate and does research science to like cure or prevent pediatric cancers.

Posted by Amelia G on November 15, 2009. Filed under Blue Blood. You can follow any responses to this entry through the RSS 2.0. You can leave a response or trackback to this entry
Tags: barbarella, belle de jour, brooke maganti, college, dr brooke magnanti, hustler, literary, secret-diary-of-a-call-girl, sex workers