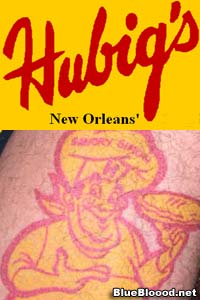 I love long form cable dramas and The Wire is my favorite of all time. So I’ve been looking forward to HBO’s Treme for quite some time. Treme is a brand new show created by David Simon and Eric Overmyer. David Simon created The Wire and Eric Overmyer wrote a couple episodes. Both of them did some work on it and on Homicide: Life on the Street. Eric Overmyer has also done buckets of work on Law & Order. David Simon is also responsible for Generation Kill, starring bad boy 3000-year-old vampire Alexander Skarsgård. (Okay, I’m a fan of the True Blood long form cable drama as well; like that’s a surprise.)

The first episode of Treme did not disappoint. The show is named after a particularly musically important historic neighborhood in New Orleans and the first episode featured appearances by Elvis Costello and New Orleans native Kermit Ruffins, both playing themselves. I’d probably enjoy the show more if New Orleans music resonated with me more, but the general musical lifestyle does resonate, I’ve spent quite a bit of time in New Orleans, I like the food, and I feel like post-Katrina resilience and during-Katrina failures are really important for the USA to examine as a nation. The folks behind this show are not ones to shy away from difficult or important issues. If Treme is anything like The Wire, and I expect it will be, the show will probably demonstrate a full spectrum of viewpoints on problems and solutions. Just one episode in, they’ve already jumped in with both feet on the issues of corruption on government contracts, the economic peculiarities of New Orleans, and the vastness of the impact on New Orleans of the combination of infrastructure corruption and destruction. There is also a lot of music, food, drinking, and wit.

One foodie scene had me puzzled. The show gets into the extreme shortages of supplies in post-Katrina NOLA, so the restauranteur, played by Kim Dickens of Deadwood hooker fame, offers John Goodman’s activist character a Hubig’s pie for dessert, when she is out of everything but lemon ices. He accepts happily and she grabs a packaged item from a locker in back and tells her chef to take it out of the plastic and drizzle something on it or something to dress it up. I had never heard of a Hubig’s before, but apparently they are quite tasty and my comrade Jonno was kind enough to point out the Hubigs web site to me. They appear to make seasonal pies, depending on what is fresh, and they do mail order. I feel like maybe I should order some blueberry and lemon and maybe pineapple and peach pies to eat while watching Treme, just for that extra authentic action. Too bad they are not doing banana right now.

And, if you are wondering how to tell people you are watching Treme (and eating packaged pie), despite being rhymed with crazy in the opening credits song, Treme is pronounced treh-MAY.

Posted by Amelia G on April 12, 2010. Filed under Blue Blood. You can follow any responses to this entry through the RSS 2.0. You can leave a response or trackback to this entry
Tags: alexander skarsgaard, david simon, drinking, elvis costello, eric overmyer, hbo, john goodman, jonno, kermit ruffins, kim dickens, nola, the-wire, treme