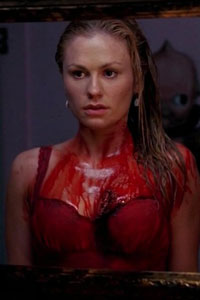 Alan Ball’s True Blood on HBO is moving along at a brisk clip. (If you haven’t viewed through episode 109, you may want to stop reading here.) Episodes 108 and 109 really highlighted the theme of who is really the hunted in Charlaine Harris’ world of vampires who have come out of the coffin.

We’ve learned that human beings can get high on vampire blood or V. We also learn that, while vampires can drink the synthetic blood substitute Tru Blood, nothing is enjoyable quite like the real thing. So there are plenty of small-minded folks in the True Blood world who fear vampires because they could hunt them and feed off of them, even if they are not doing so. Yet there are also reasons for humans to hunt vampires, although again most do not do so. Time to look in a mirror to figure out who is the hunted and who is the hunter.

Some vampires, such as the jaded 1,000-year-old nightclub impresario Eric, played by Alexander Skarsgard, are annoyed by the whole vampire pride and vampire rights amendment thing. They are satisfied with their position in society and are perfectly happy to exercise their power from the shadows. There is a scene where the human leading lady Sookie Stackhouse, played by Anna Paquin, is kissing vampire leading man Bill Compton, played by Stephen Moyer, and their chemistry is notable. Eric’s most trusted retainer turns to him and says that if she still had feelings, she would be moved by this public display of affection. Eric replies, in the most bored voice imaginable, that he wouldn’t.

The best culture clash in the most recent two episodes is where Sookie’s best friend Tara Thornton, played by Rutina Wesley, turns to her alcoholic and possibly formerly possessed mother and her friend, who are all decked out for church, and points out that putting on a ridiculous hat and going to church isn’t going to make them better or happier than Tara. I personally kinda like the jelly bean colored Southern church-going style of hats, but I don’t really have a hat-shaped kind of head. My skull and hair are generally wrong for most hats I’ve tried on, although I always welcome hat source suggestions.

I’m looking forward to tomorrow’s episode of True Blood. There is going to be a vampire tribunal, presided over by a vampire elder played by Zeljko Ivanek. Zeljko Ivanek is perhaps best known for his portrayals of Governor James Devlin on Oz and of the driven prosecuting attorney Ed Danvers in Homicide: Life on the Street. The Ed Danvers character was so popular that he was brought in as a crossover character in a number of episodes of Law & Order, even after Homicide was canceled. Zeljko Ivanek has actually done a lot of political and legal acting roles over his long career, so I think he will be very entertaining as a vampiric judge who gets to decide when it is or is not all right to kill.

Posted by Amelia G on November 8, 2008. Filed under Blue Blood. You can follow any responses to this entry through the RSS 2.0. You can leave a response or trackback to this entry
Tags: alan-ball, alexander-skarsgard, anna-paquin, charlaine-harris, hbo, skull, sookie-stackhouse, stephen-moyer, tara-thornton, true-blood, vampire, vampires