I am really thrilled to be able to announce that the first set of Razor Candi has just gone live in the Blue Blood VIP. Yay!

Although Blue Blood receives hundreds of submissions a week and has for many years, I don’t get this excited very often. Heck, I guess we don’t even get to say “yes” all that often, from a percentage viewpoint. I consider what someone looks like in terms of raw materials, but I look at least equally at personal style and attitude and diversity of interests. Although Razor Candi is knockout gorgeous in her photos, I think it is extra-cool that she does her own makeup and styling for her shoots, and, in addition to having her picture taken, she paints and travels and has adventures.

I believe Razor Candi was actually a contributing photographer for one of Blue Blood’s sister sites like six years ago. Pictures I think she shot of Eden Prosper ran on SpookyLinks when it was doing a Spooky Hottie of the Week.

At any rate, Razor Candi has appeared in approximately a zillion publications, including tons of magazine covers. She has a sexy attitude and incredible style, with an artistic eye, and can rock a bunch of different cool looks, although her deathrock one is probably my favorite. I’m honored and pleased that, when she decided to grace the world with beautiful nudes, Blue Blood was her first choice of venue. (Plus this confirms my sense of a just universe where all is right in the world.) Expect to see a lot more Razor Candi in the coming months. 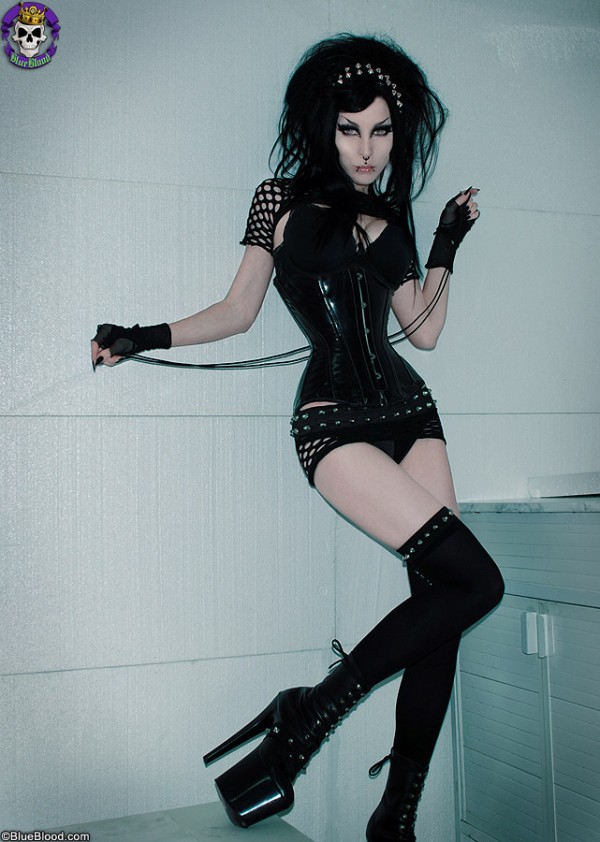 Posted by Amelia G on July 15, 2010. Filed under Personalities, Sex. You can follow any responses to this entry through the RSS 2.0. You can leave a response or trackback to this entry
Tags: artistic, artistic eye, beautiful, blue blood, deathrock, hottie of the week, knockout, makeup, nude, nudes, razor, razor candi, razorcandi, spookylinks