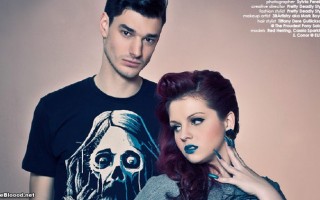 
The new issue of Jennifer Link’s Auxiliary magazine is out now. Some of the makeup in this issue is really cool. The makeup by a Dannie Page in photographer Bailey Northcott’s Firestarter editorial looks really cool; it is over-the-top unusual and brightly colored and the photography makes the colors pop. Model Porcelain does her own […]


When I put makeup on, while I have mainstays for things like eyeliner and foundation, I love having as much assortment as possible for colorful things like eye shadow. Especially for costuming, I think it is fun to use kits, rather than having to plan and decide in advance exactly which colors to buy. Manic […]


The new August/September issue of Auxiliary Magazine is out now. The cover features designs by Tyler Ondine Whitman of Heavy Red fame and is photographed by Jennifer Link. Inside there is also a feature interview where writer Vanity Kills talks with Heavy Red’s head honcho about the history of the company, the inspiration for the […]


Boing Boing‘s mission is to be a directory of wonderful things and they certainly have some wonderful things posted today. The site currently hosts photos from the Austrian World Bodypainting festival, lensed by a photographed named Heinz-Peter Bader. These images do the best thing such pictures can do, at least in my view, and make […]

Does your car need eyelashes?


I’m a big fan of flamboyantly gigantic eyelashes. They can be a pain to put on and take off, but they really complete a dramatic makeup look. I love photographing them and I like to wear them from time to time. A downside of the really good fake eyelashes is that they tend to be […]

- by Amelia G in Personalities, Sex


I am really thrilled to be able to announce that the first set of Razor Candi has just gone live in the Blue Blood VIP. Yay! Although Blue Blood receives hundreds of submissions a week and has for many years, I don’t get this excited very often. Heck, I guess we don’t even get to […]

- by Forrest Black in Books


I first met the intrepid LA Weekly nightlife columnist Lina Lecaro back in the darkly glamorous and decadent millennial y2k nights of Club Makeup a decade or so ago. It was the place to be, full of noise and glitter and genuinely flamboyant craziness. I really should dig up some of the pictures from that […]