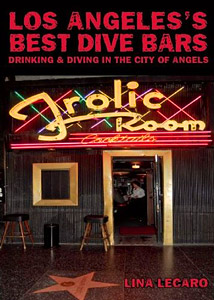 I first met the intrepid LA Weekly nightlife columnist Lina Lecaro back in the darkly glamorous and decadent millennial y2k nights of Club Makeup a decade or so ago. It was the place to be, full of noise and glitter and genuinely flamboyant craziness. I really should dig up some of the pictures from that period. In the years since then, I run into her again and again whenever I find myself at whatever happens to be the current ‘it’ spot. If it’s the event everybody wants to be at, I know I’ll see her there, always looking like she’s having fun too.

The same forces that drive the hottest spots here in the land of Star Maps, publicists, and red carpet paparazzi also paradoxically drive a thriving back channel of secret hideaway dive bars. There are times you want the spotlight and times you really need to escape from the pressures and obligations it brings. Los Angeles offers some great escapes. Ever since I’ve moved out here, I’ve found the L.A. club and dive bar ecosystem completely fascinating. There is a migratory cycle where people who are somebody, or at least think they are, go to the most obscure tucked away tiny bars to get away from the pressures of all the glitz. Then, eventually, hangers-on and lookie-loos start to hear where the stars and cool kids really go. Suddenly the obscure is no longer obscure. And as the lyrics go, if you pick up on it quick, you can say you were there. Some tiny alcohol-soaked shack has to break out the velvet ropes to handle the crowds of people complaining about how the crowds are ruining their favorite spot. The staff seem just as pleased to see the crowds move on to the next hip place as they were to see them arriving in the first place. Like a farmer rotates his crops, there is an endless migration from hotspot to cool unpretentious hangout, which turns into a hotspot again, leaving other out of the way places in the shadows cooling off and waiting to be discovered all over again.

When it’s time to find a new dark corner, Lina is here to help. She’s put together the definitive explorer’s guide to Los Angeles’ Best Dive Bars. So many of my favorite haunts are featured. I love little dark spots like Ye Coach & Horses, where I had my first meeting with Voltaire about shooting some stuff for Blue Blood. There are better known places like Frolic Room, where I’ve had way too many conversations with strangers I can barely remember at all, or Jumbo’s Clown Room. Seedy spots from my ‘hood like Gold Diggers, which Lecaro insightfully describes as a “fetid little freak house” make her top ten, and yes, I’ve been there too. Looking through this book is like drunk driving down memory lane.

Lina Lecaro has been doing lots of fun local book signing events for Best Dive Bars, almost like some sort of publicity pub crawl, and she’s got another entertaining one scheduled at Book Soup on Sunday, August 15th, where she says “all the “real” authors sign!! :)” so stop by pick up a copy. She’s one of my most trusted L.A. nightlife guides and always knows where the fun is at.

Posted by Forrest Black on July 2, 2010. Filed under Books. You can follow any responses to this entry through the RSS 2.0. You can leave a response or trackback to this entry
Tags: author, club, club makeup, Dive Bars, drinking, drunk, frolic room, glam, glitter, hollywood, LA, Lina Lecaro, los-angeles, makeup, nightlife, paparazzi