My block is generally bracketed by Russian (or possibly Armenian) gangsters in big black cars. They keep the neighborhood safe. Hollywood is probably pretty safe anyway. I occasionally hear gunshots at night, but never anything like an AK. Today, however, LAPD bookends my street instead.

Rapper Ice Cube has been set up to shoot a music video on my block since 7am this morning. There is at least one guy in a colorful three piece suit who must be suffering in the heat. There are a couple of big fine women in big fine eyelashes and small skin-tight dresses in purple and animal print. Although fewer than you’d maybe expect for a rap video set. But mostly there are a lot of people in muted T-shirts standing around. Today is scorching hot and the afternoon sun was really harsh overhead, so they may be doing a lot of waiting for the light to be right. Mostly the caterers appear to have what to do. One manager type guy is loudly telling two of the police officers hired for the shoot day about how Ice Cube gets death threats. The death threat talker is loud. Maybe to impress the big fine women. But he is suddenly silent when my crew walks past. Maybe he doesn’t know how loud he is or maybe he thinks I’m gothic and, like a bat, use sonar to hear and thus can only make out sounds in my physical proximity.

They did one shot which had an interesting set-up. They have a really beautiful big fine red convertible for the day. They had like four guys in the car, driving slowly up my street. A pair of guys jogged along beside the car on each side, each team of two holding a different reflector. I only noticed two cameras and they seemed to be getting this from the back, but I suspect it will make sense in the final video.

My balcony is pretty much a front row seat to the scene. I considered taking a few shots of the set-up. But then I thought about how many photographers have taken pictures of Forrest Black’s and my set-up, when we were shooting on location. I thought about how Forrest has literally been shown portfolios where someone is showing off having shot over Forrest’s arm. Not that I would, a zillion years, ever consider a snapshot portfolio work, but, upon reflection, I decided not to take any snapshots of the Ice Cube video shoot. 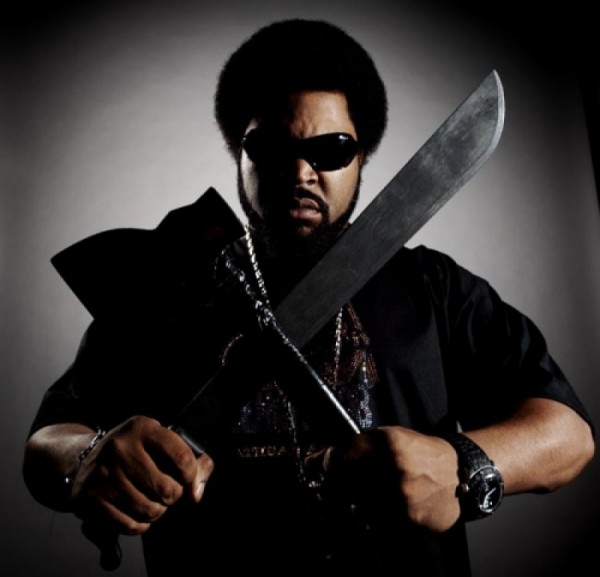 There is something surreal about this sort of thing and something terribly commonplace about it in Los Angeles. Sometimes I love the sense of possibility in Hollywood, the sense that anything you can dream, can be found under the the palm trees. But sometimes I don’t like the sense that, even if you are having a perfectly good day, maybe you should be doing more somehow.

It is really hot outside today, though. So I’m glad I’m not sitting in a red car with no A/C in this sweltering sun.

Posted by Amelia G on September 4, 2010. Filed under Music. You can follow any responses to this entry through the RSS 2.0. You can leave a response or trackback to this entry
Tags: convertible, eyelashes, gangster, gothic, guns, heat, hollywood, hot, ice-cube, photograph, police, rap, street, surreal, video, women, work