I keep hearing this ep referred to as the finale, which seems wrong. It’s the last ep of the season, of course, but to be the finale it has to top last week’s epic exploding green bloodbath. I don’t anticipate that. We still have to address multiple hanging storylines, including Dany’s little dragons, Jon and Ginger and Snow GWAR, not to mention Fat Sam and the rest of the unhappy campers. And Robb and Nurse, and Cat, and Jaime and Brienne, and the whole fucking mess up at Winterfell. Oh, and Arry & Gendry. I’m missing something…

I take it back. If they manage to tie off this gigantic clusterfuck, that will solidly top last week’s big boom.

And this week’s episode of Game of Thrones opens LOST style, close in on the staring eye of Tyrion. And we pull out onto none other than Pycelle, and his smirking revenge.

A big wet load of shit hits the floor, and who do we hear but Joffrey, lolling on the throne with his Jughead crown and unsullied armor. Holy shit, the pretentiousness of Tywin. Is he going to ride into every room on a white horse from now on? And Baelish is so excited that he uses his real accent. Varys is repulsed.

Oh dear, this is a brutal farce being played out, scripted like an ep of The Bachelor. Woof, Marge. Nice gown.

When was the last time we saw Sansa sneak a smile? And oh, here’s Shittyfinger the Pimp, striking at the most vulnerable and valuable woman in the room. Does she trust him?

Ros is tidying up the latest wreckage done her with a bit of concealer, and a bit of misdirection with her spectacular rack. And a bit of banter, the usual moves, and her hand bottoms out without hitting dick. It must take at least that to freak Ros at this point. And Varys has plans for the new Lord of Harrenhal. I approve.

And Sawyer’s still running his mouth, with the usual litany of sexual bullying and probing for weakness. And Big Brienne and Jabbering Jaime make a decent double act. Needs work, though.

Holy crap Brienne has no trouble with three meatball mercenaries. Sawyer is actually impressed, and takes a clinical interest in her sword-fucking technique.

And Robbo is going to fuck up a family treaty over Lady Bonesaw. Well, that’s an honorable oh Jesus what is it with Starks and sex?

Stannis is not happy, and Melisandre isn’t looking so smug. Where is your God now? No one could deliver that line but Stannis.

And she’s dosed him. This explains a great deal…

Odious Theon is fucked rock solid, thank you, wise bald man. Self-pity suits him. Maester Louie is in fact a wise bald man, and Theon has a moment of honest self awareness. Not that it helps.

So Odious T tries his hand at Tyrion-style troop rallying oratory, and it’s going pretty damn well. He even gets to the big war cry before boom drops. Oh, First Mate Finchy. You are a bastard beyond all bastardy, but your comic timing is lightning. One could just about pity Theon, but really: Fuck him.

(Mind you: Finchy has been behind every move Odious T has made since he left the docks on Asshole Island. I could be sold on the idea that T’s unspeakable dad scripted this entire debacle right down to delivering him as a traitor to whoever came to take back Winterfell.)

l love Tyrion’s Omar battle scar. Half Man Comin’! It be Half Man! I do not buy Shae as the stand-by-your-man type, but I wouldn’t. I do sort of buy Varys as honestly admiring Tyrion, but I also think he owns a time-share of Shae’s loyalty. Just a guess. (He totally owns Podrick.)

That boat ride to Pentos sounds good to me, but Tyrion has another of this ep’s tearful moments of honest self awareness. For fuck’s sake. Does everybody hug? Does everybody learn?

Robb, you are an imbecile, and the simultaneous handfasting vows are the creepiest thing ever.

And up the hill the Pai Mei’s dojo, and nope, we’re back in LOST, in the shadow of the statue. Is this a riddle? At least look for the door first. (Oh, crap, I just realized Dany is Claire from LOST.)

Meanwhile, in lovely Ireland, it’s Capt. Jaquen! You excellent sneaky fucker. And another offer of escape (is that three? Four if you count Shittyfinger and Sansa, which you shouldn’t.) And another not quite tearful moment of honest self awareness, and Damn, Capt. Jaquen can pull off an exit.

Well, whatever happened in Winterfell has already happened. Rickon’s confused, and so is Hodor, and so are the dire wolves. I’m confused about how Louie dragged all the way to the Godswood. Farewell, you lone sane counterpoint to so much idiocy.

And we’re doing Lone Wolf and Cub with Hodor and Bran? Magnificent.

Room to room with Dany, on a hallucinatory tour of Existing Sets and CGI. I’m sure this is meaningful and symbolic.
Dany is totally a Winter, by the way.

DROGO! Don’t just sit there! Give us OWNAGE! Please, just once! (More Dothrak subtitles in this ep than we’ve had since Drogo was still riding. Just saying.) Is this another offer of escape? Every major character in this ep has been offered an alternative to their fate, except Stannis and Bran. Tearful moment of self-awareness, and another back turned. No one is interested in turning away from the paths they’ve chosen, ill-considered, suicidal, or blood-soaked though they may be.

And we’re done with this, and we finally get our dragons. And the Guild Navigator(s) reveal the magical agenda, and Dany shows off her magic word. Goodbye, dreary wizards, and hopefully goodbye fucking Qarth.

Back in Iceland, Ygritte can’t break the habit of fucking with Jon Snowbastard. I think she likes him. And Quorin Halfhand goes the distance selling his double agent as a traitor. (Ygritte is clearly another one who appreciates a well-executed sword-fucking.) And we get another of these dishwater dull CGI reveals. It’s a valley. With tents. Thanks for the drama.

And we get the second-biggest tits of the ep as the Lost Khalasar brings the pain to Xaro’s bedchamber. Dany’s voice has dropped an octave after her first kill, and she looks to have gotten a taste for it. And brutal vengeance, and looting, and yes, Dany is digging this.

And we whiplash back up to the Fist of the First Men, which sounds like a club night I’d skip, and we’re digging up frozen shit for the fire. Three blasts means what, I’m sorry?

OK. Three blasts means fucking zombies. Zombie Horse. Ice Spear Zombie General. And a nice, slow, inexorable zombie army. That, thank you very much, is how you drop a CGI reveal. Well done. And it was nice knowing you, Sam.

Well, everything I was worried they couldn’t cram into this ep got crammed, so I have nothing to complain about. Actually, fuck that. I am going to complain bitterly and at great length about having to subsist on re-runs and True Blood until season 3 drops. But I will spare you reading it.

Thank you for your indulgence over these past ten weeks. Let’s do this again some time. 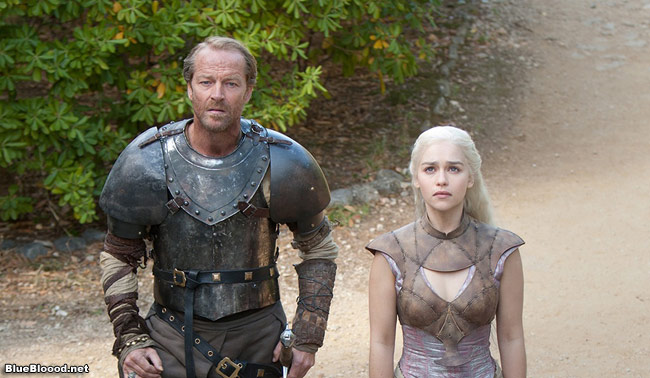 Posted by Will Judy on June 3, 2012. Filed under Headline, Popcorn. You can follow any responses to this entry through the RSS 2.0. You can leave a response or trackback to this entry
Tags: arya, daenerys, game of thrones, gendry, gwar, hbo, petyr carcetti, sansa, true-blood, tyrion, xaro, zombie, zombies