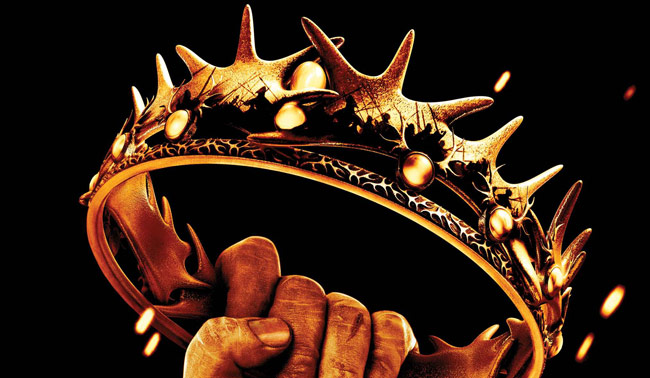 If they could get away with it, this ep would be called something like “Old Familiar Faces (Not Currently on Spikes)”. We get to catch up with all last season’s survivors, all looking at the same red comet, all wondering what the living fuck they have gotten themselves into.

We start with King Joffrey, who is celebrating his birthday by being a little turd and making his lackeys kill for his amusement. We get the first of what I hope are many references to the Guccione version of Caligula as he orders a drunken courtier to be forcibly wine-bonged, and we find out that even the Hound feels sorry for Sansa. All this will be significant, I am sure. And we see Sansa, cultivating a POW’s thousand yard stare. (First death of the new season: 04:59, presuming death upon impact.)

And Tyrion makes his entrance, in what I hope will be the first of many references to Blade Runner, looking worrying like one of J.F. Sebastian’s engineered housemates, marching across the floor.

Not content to barge up to just one table, help himself to a drink and throw shade all around, Tyrion swans into the small counsel, ending a dull conversation about how to further fuck over the peasantry in the face of a world war and coming ice age. This catches us up with Varys (still alive, never says a word), Maester Pycelle (shut up shut up shut up), Mayor Carcetti (looking puffy and miserable), and the stooge who got appointed chief of police, who is being handed his balls by Queen Regent Cersei (who looks more like Tyrion the angrier she gets).

Northward then to Winterfell, where Bran is probably glad he can’t feel his ass falling asleep as he sits through the morning all-staff meeting. No wonder he’s lucid-dreaming about being a wolf. Tonks is busy filling in for a couple of secondary characters whom I assume will be cut for clarity’s sake, and Hodor is Hodor. Hodor? Hodor.

And we have the comet, which is an omen of everything but a clearance sale at Target. In what I hope is a device that never gets used again, we drop camera back down on Dany and the Lost Khalasar. We learn that Dany is terrible at taking care of animals, but good at issuing orders in a confident voice. She orders her last remaining riders to abandon her in different directions in a horizonless wasteland, but it’s better than looking indecisive.

And comet and down and Beyond the Wall with Jon Snow and the homophobic Men in Black. And cloaks and horses and trooping through the woods. And deranged snow hillbillies. And oh please not a subplot that’s nothing but a shitty camping trip broken up by visits to crazies and ghost towns.

And comet and down and welcome to a bunch of stuff that makes no sense at all if you haven’t read the book. No, it’s not a clambake, it’s an act of dread-inducing iconoclasm and no that’s not Stannis that’s Davos and the guy who looks completely out of place on this show is Stannis and of course the lady in red is evil. She’s a woman, and she’s not acting like she expects to be smashed across the face for speaking. Witch. And we get our second death at the midpoint of the episode and I go refill my whisky.

I’ll pause here to say that I am enjoying this more than I expected to, and it’s partly because they aren’t slavishly following the book and mostly because they are clever enough to spice up an obligatory re-entry episode with a lot of Tyrion vamping.

Tyrion doesn’t get all the good lines, for once, and we get to see a lovely bit of repartee between The King of the North and the Kingslayer, who is seated and cuffed in a stand-alone cell, in what I hope is the first of many references to the Silence of the Lambs. We also learn that a snarling direwolf is a great trick for getting the last word.

And oh crap: Shae. I hate Shae, because Tyrion never gets in a good line around her. I realize this is to humanize Tyrion and show the vulnerable side of him (he’s removed his armor, if you missed that), but vulnerable Tyrion is not much fun and banters like Leonard from Big Bang Theory. I watch Big Bang Theory for Sheldon, and I watch this show for Fun Tyrion.

And then we get Cersei, taking her bad feelings out on Carcettifinger, who really should know better than to rise to the bait and mouth off at her, especially with Varys’s washerwoman ten feet away. (How do we know she’s Varys’s spy? She’s in the shot at the beginning and end of the scene.) We establish that no one knows where Arya is, and that there’s a reason Lord Petyr isn’t looking quite as smug and sleek as last season. King Robert was an easy boss, it turns out.

Back to Robb Stark and his budding trucker hat beard and Geordie accent, engaging in pointless diplomatic feints, stupidly trusting the odious Theon, and getting his mom off his back with another solo sales pitch to someone she hasn’t seen for years.

We then come back around to Joffrey, who is having Varys’s spies redecorate his throne room. Cersei, presumably still buzzed from giving the royal treasurer a brownout, rolls in blustering about Arya, gets a little too passionate about the need to get her brother back, and gives Joffrey an opening to start asking hard questions about the rumors going ’round. At this point everyone except John Snow and Dany has made some reference to Joffrey being an inbred bastard, so it’s pretty much his turn. And he takes it to the next level, wondering aloud how many other results there were to Robert’s incessant daily whoring.

In what I hope is the first of many references to Tyrion’s pimp-hand lecture from last season, Cersei gives Joffrey a solid crack across the cheek. This ends with both of them slackjawed, both aware that (a) he bought that wholesale for talking to his mom like that and (b) he’s king now and that means he’s too big to smack by a death penalty or two.

In the end, they take a mulligan on that question and turn their attention to murdering the shit out of all Robert’s known & suspected bastards, including the wee baby Ned Stark doomed by visiting last season at Lord Carcetti’s brothel. So we get super-gratuitous flinging titties followed by an infant-knifing about a yard off-screen.

So who are we missing? Right, Arya and surviving bastard Gendry. They are on a cart, headed north, not fucking fast enough. That’s everyone and more, and we’re done for week 1.

So what do we take away from this? Why was it called The North Remembers? How many episodes until Varys gets a line? Do I stick with whisky or switch to wine for next week’s recap? Let’s discuss. 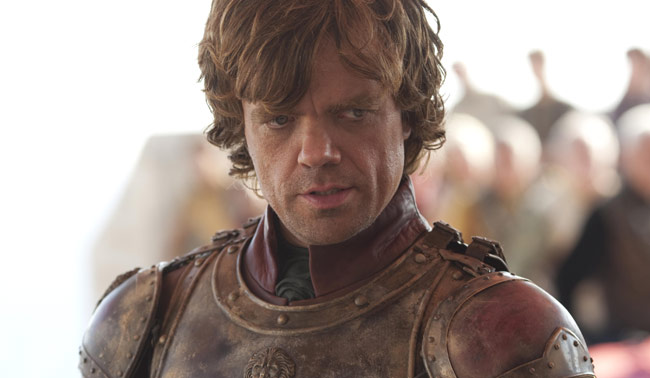