Tonight’s refreshments are: The last gasp of the Old Weller 107, which I have conquered after a long bloody siege. And Negra Modelo for beer, because I made chili. If it really comes down to it, there’s the Evan Williams single barrel Bourbon, vintage 2002. I am going to drink for every dull, pedantic utterance and every child murder, so I have provisioned the household.

This week’s episode of Game of Thrones opens with a murder of ravens (drink), and AKA Asha day drinking and chowing fried chicken. And throwing shade, and toying with Theon’s impotent anger. I think I will drink for every utterance of cunt this ep as well. (1, 2, 3.)

Her point, that Theon took a castle with 20 men and somehow intends to defend it with no supply lines and no reinforcements, and having marked himself as an oathbreaker and child murderer, is damn sound. But the purpose of the scene? Showing that Theon has no idea what to do with the notion that his sister cares what happens to him, any more than Tyrion knew what to do with his mute pity for Cersei.

Meanwhile, up in CGIceland, Ygritte is name dropping Ned Stark to some mook in a Party City halloween parka. Jon Snowbastard learns the fate of the rest of Halfhand’s rangers (all dead, all his fault).

And back in Camelot, Robb & Nurse are having a leisurely chat-walk, with their eye-rolling escort plodding behind. And lady Cat has fucked up. Well, not really. Fuck Lord Dogfoodhands and his grousing about his sons. They went to war, they died. Trading royal hostages is above his pay grade.

A quick trip to Rick Deckard’s unconscious mind, and it’s Sawyer from LOST! Nope, just Jaime, running his mouth like an eight year old. And Kingslayer and Brienne are heading up the river. I’m already mentally pre-scripting this as the north of the Do Long bridge section of Apocalypse Now.

Lord Tywin’s having another fucking meeting, and Arya’s busily spying and slinging Dornish. And it seems like everyone’s given up the pretense of Joff being a Baratheon. And cunt really is the word of the day. (4)

And back in the snow, Quorin Halfhand is grooming Jon Snowbastard as a double agent. This will end well.

Back in King’s Landing, Tyrion is irritably cramming for the upcoming siege. And talking men’s fashions with Bronn, who knows the rules: NO CAPES. Cloaks, whatever. And here’s Varys for 3-way pedantathalon about the pronunciation of Arch Maester Sh’ibboleth’s name (drink, just drink).

And here’s Podrick! And Cersei looks awfully smiley. Cersei and Tyrion have a little spat in front of Varys’ spies, and Tyrion notices Cersei’s tipsy smirk. Yep, she’s got Shae, and there’s that word again (drink for cunt #5).

And poor Roz. She’s going to have no good memories of King’s Landing.

And Shae’s OK, and sweet talking about cutting off faces. Still don’t like her.

Lord Flaymate is getting antsy, and here’s Nurse. Oh good, if we get her backstory, maybe she’s going to die?

Oh, balls, Robbo. Your mom’s locked up for a few hours and you’re all over the rec room with some chick.

And Arya takes a leap of faith, past Capt. Jaqen’s Hannibal Lecter tableau. Why the fuck is she bringing Hot Pie on this trip?

And we get a bit more of why Stannis is so bitter, and why he’s bonded with Davos. Thanks. And I’m starting to think Stan has a sense of humor, offering Davos Shorthand a gig as… yes… HAND of the king.

Why are all the gods such vicious cunts? (I regret this decision.) A pleasure to have some proper banter, thank you Tyrion and Varys, even if it’s about office politics as much as anything else. And yes, gentlemen, who gives a fuck about Dany and her ickle wee dwagons?

Well, Dany does, and therefore so does Jorah, who somehow hasn’t lost the reflex of trying to talk sense to her.

And a bit of cryptic with Theon & First Mate Finchy, and the penny drops for Maester Louie. This means I owe the Red God two drinks, I suppose.

This is a set-up episode, full of departures and plotting. And mercifully short on Joff, who swans in for less than a minute worth of Draco Malfoy shit talking. The only thing that actually happens is King Robbo breaking the Stark family dry spell. Apparently next week we get the CGI budget-blowing battle for King’s Landing, which I am looking forward to watching if not re-capping. Be seeing you then, at the turning of the tide. 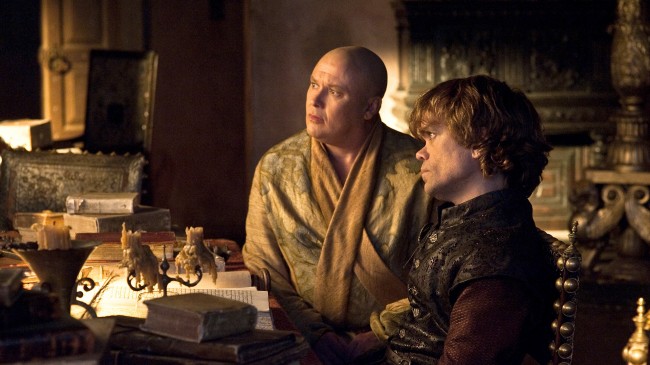 Posted by Will Judy on May 20, 2012. Filed under Headline, Popcorn. You can follow any responses to this entry through the RSS 2.0. You can leave a response or trackback to this entry
Tags: arya, asha, bronn, cersei, daenerys, davos, game of thrones, hbo, jaime lannister, jaqen, joffrey, jon snow, pedantathalon, sam tarly, stannis, theon, tyrion, varys, ygritte