Game of Thrones, Episode 203, What is Dead May Never Die, or Everybody Hates Theon and Nobody Likes Anybody Else Much Either

Our ep opens with Jon the Bastard having been kicked like a bag of shit from the woods all the way to the barn. This is pretty much the life of a Stark these days.

It turns out the mystery of Craster’s boys isn’t much of a mystery, so it’s a wonder why he’s so tetchy about it and why the Lord Commander didn’t just brief the boys about this when he was telling them to keep their paws of Craster’s splay-toed snaggletooth wives. The Lord Commander is a shitty communicator.

So, instead of Tyrion crossing floorspace, we have wolfcam following lumbering Hodor. And we get some fairly tight and creative direction here, as we realize that we are following the dream to the dreamer. And we get the comedy of Maester Skeptical Squib telling Bran there are no more giants with Hodor looming in the corner.

And BOOM we get some welcome ownage. Ooooh, and it’s Ser Loras getting flattened again, and it turns out the chap in the Ultraman armor is no chap at all, and is using this brutal display as a job interview. Rise, Lady Brienne of the Kingsguard. Nice hustle. 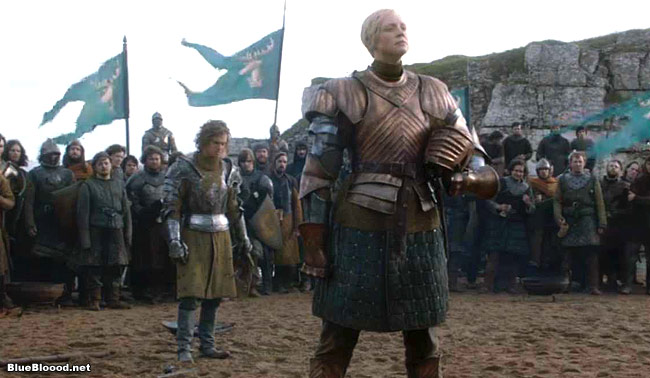 Lady Catelyn, having sat through Ser Flowers getting plowed and humiliated, teaches him to keep his pretty mouth shut. Which Renly clearly finds hilarious.

Holy SHIT Brienne is like 7 feet tall. She could handle half a WNBA squad with a smile. This is clearly the same CGI they use to make the dire wolves look like slavering Clydesdales, but look at her next to Lady Forehead Creases. I’m in love, I am not ashamed.

And now for this week’s installment of Everybody Hates Theon, now with extra repellent incest overtones. I’m annoyed by AKA Yara because they gave her a stupid name and cast her as dull-looking rather than ugly-hot. I’m going to have to get over this, just like everybody else with “that’s not in the boooooook” issues.

And logistics and maps and Theon, who’s barely seen the ocean in 9 years, is whining about not getting an admiralty. What’s the real issue here? Well, for Theon it’s abandonment, and for his asshole of a father it’s Theon reminding him of being emasculated by Fat Bob Baratheon and his sidekick Ned. Good job cutting to the heart of things, odious Theon.

Fucking Shae. Shae is the Betty Draper of this show. In the abstract you sympathize and relate to how miserable and stifled and trapped she is, but watching her interact with Tyrion (who is totally the Don Draper here) you just want to tell her to shut her sniping pie hole and deal.

Sansa’s taking it light on the Dornish, all things considered. This dinner table is the rest of her life in miniature, surrounded by people who blithely don’t give a fuck about her and people who will kill her in a heartbeat. And she has to get her dinner down without sobbing or saying anything she might actually mean.

And for for company she gets FUCKING SHAE, the anti-Jeeves. It takes a lot to make Sansa sympathetic, but that will about do.

And in another tight piece of direction, we see Tyrion setting up the remaining members of the small council on his chessboard. Pycelle gets one story, Varys gets another, and and Shittyfinger the Pimp gets his and actually has the cheek to ask what’s in it for him. And oh, don’t tell the queen…

Speaking of sloppy, Renly’s putting down the Dornish harder than Tyrion, in terror of his bride’s demands. And he praises her gown… Queen Marge of course knows the score, and is game for whatever sort of of brother/sister relay race is required to get the Baratheon/Tyrell alliance sealed with a baby. If Renly knew what Bourbon was he’d be calling for a handle of the stuff.

And Tyrion’s got a result: He’s knocked Cersei off her axis, and he’s exposed Pycelle as an untrustable fuck.

And Theon’s made his choice. Has anyone but Tyrion laid hands on a piece of paper that hasn’t gotten shredded or burned this season? If a GoT drinking game were a survivable proposition, you’d certainly have to drink for document destruction.

Baelish sounds pretty fookin Irish when he’s mad. And Pycelle is well past his prime as a liar. And Varys would be my choice as a drinking buddy too.

And Arya’s PTSD is about to get a bunch of fresh imagery to cycle through her nightmares. By the way, apparently once you let slip your central motivation you have about 5 minutes before you get the living shit killed out of you. Keep your life story to yourself on this show.

And the plot moves along. Lady Cat is stuck trying to deal with Renly, who’s caught between a sibling act, and imminent Baelish, who’s got scary unresolved issues with her and is a vicious pimp. Robb’s got more kings to fight than he knows, John Snowbastard’s heading further into a frozen hillbilly hellscape, and Arya & Sansa are POWs. It’s some serious bullshit being a Stark these days, and by the way winter is coming. 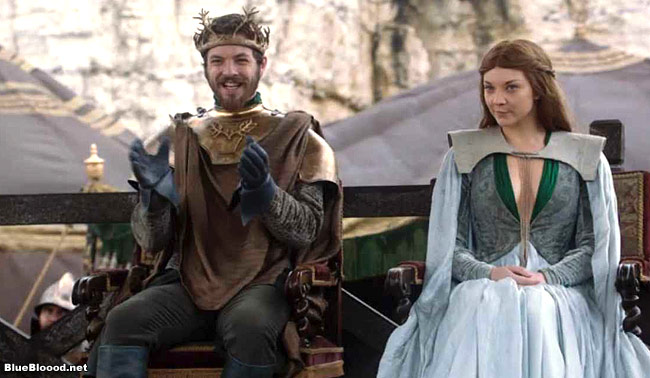 Posted by Will Judy on April 15, 2012. Filed under Headline, Popcorn. You can follow any responses to this entry through the RSS 2.0. You can leave a response or trackback to this entry
Tags: arya, baelish, brienne of tarth, game of thrones, hbo, jon snow, petyr carcetti, pycelle, renly, robb stark, theon, tyrion, varys