Tonight’s refreshments are: Familia Camerena Tequila (Reposada), and much seltzer and lime. It is stinking humid summer here now, and that means summer beverages. Also, nothing complements bloody flaming ownage quite like tequila.

Since I assume this ep will be impossible to recap other than reciting the body count and litany of horrors, I’m taking this opportunity to do a little housekeeping beforehand.

First off, I’d like to pay overdue respect to Alfie Allen, Emilia Clarke and Sibel Kikelli (Odious Theon, Dany, and Fucking Shae). The fact that I hate the sight of the characters they play is a tribute to their artistry in realizing and portraying them. Special mention goes to Aiden Gillen (Shittyfinger the Pimp), whom I am sure is a good dude and someone I’d happily stand a Guinness or two.

(That kid who plays Joffrey? Fuck him. If that kid hasn’t tortured a cat to death, it’s just because he’s overscheduled.)

Secondly, I’d like to express my general bafflement regarding the set of compression algorithms the writers and producers are using. Poor Tonks had to carry four characters and fuck Odious Theon, which is not fair. And in spite of this economy, we have been subjected to Nurse Not-in-the-Book. Getting to see both of these beautiful women naked does not entirely pacify me. This will require some off-season rumination and lengthy posts that no one will read.

I feel much better for having said these things. Now: Let’s see some fucking blood.

This week’s episode of Game of Thrones opens on Davos’ Flying Dutchman, and that’s a tight little smirk on Stannis’ mug. A bit of Saving Private Ryan tension and puking below decks, and Davos and his creepy son have a heart to heart. You are so doomed, creepy son.

And Tyrion’s had a great night’s sleep, apparently. And Fucking Shae, ardent and cryptic, speaking from the heart. Can’t fuck your way out of everything? With a knife you can.

And Cersei apparently has to suffer through her dealer’s boring conversation just like everybody else, to a point. Just shut the fuck up, Pycelle. Keep your blether and give me the poison.

And the glee club’s getting spirited up. Boozing, bullshitting, and some gratuitous nudity. Bronn is popular, and Clegane is not. You like fucking, drinking and singing? Come on, Hound, don’t disdain these things without giving them a chance.

And saved by the bells. One more drink before the war?

Varys hates the bells. And Varys hates magic. I love Varys, just because nobody else will properly banter with Tyrion. Bronn’s fun, but Varys is a wit. And poor Podrick girding Tyrion in his battle armor; looks like a dumb kid at a build-a-bear party at the mall.

Grim teasers from Varys, and shitting Christ, that is a sorry little axe Tyrion is meant to be saving a city with.

And a last bit of back and forth with Tyrion & Bronn. Enhances it, really…

And a stinger from Sansa, and ugh, Joffrey. Kiss it? Tasty words, you little shit. And woof, another stinger or two from Sansa. The worst always live… 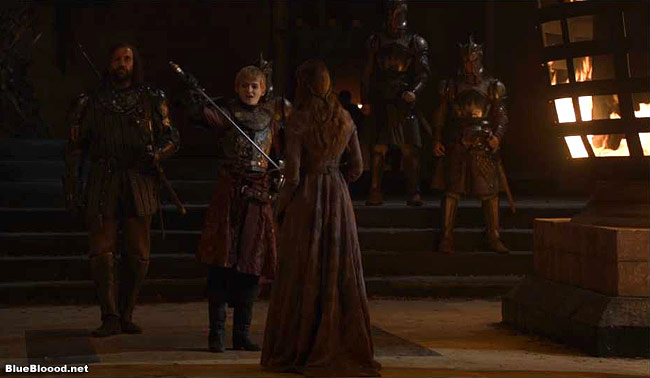 And out into the dark (what fucking time is it?) with the the Lannister Brain Trust. Where’s the fleet? Fuck you is where.

Davos would also like to know where the fucking fleet is, and he smells a rat.

And Cersei’s got her breastplate on, to go with some serious bitchface. She doesn’t hate your guts, she’s jealous. Thanks for the shitty advice every bully’s victim gets, Fucking Shae. Regardless, Cersei’s hitting the shit out of the Dornish. I like drunk Cersei. She gets talking and it gets fucking raw. Sansa’s going to be calling for refills before long.

And out on the battlements, Tyrion’s holding fast, and there’s only one ship? Davos concurs: Only one ship. With no one aboard. Yes, this is the last voyage of the H.M.S. Pigshit. Say it with me, everyone. By brightest day, by darkest night, fear my power: Green Lantern’s OH YOU ARE ALL SO FUCKED… 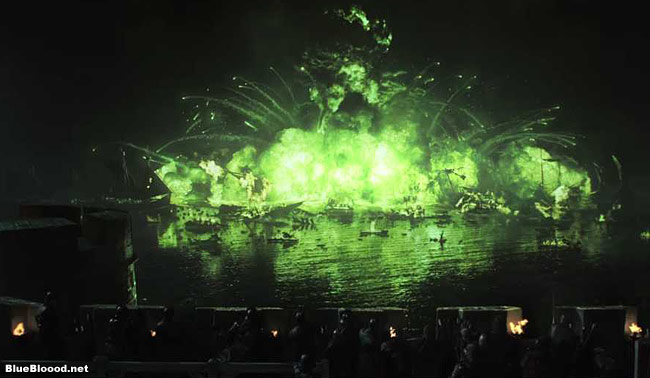 And Tyrion looks out on his handiwork and is sickened. The Hound is sickened. Joffrey has a softie. And Stannis? Fucks given? 0.0000 and fuck you. Storm the beach head.

Cersei’s not going to remember much of this, but she’s TALKING here. Ugh, that one eye bigger than the other thing, the Joan Crawford dramatics.

Meanwhile on Omaha Beach, Stannis’s troops are eating arrowheads, fire, and rocks. And to the mud gate they roll. OWNAGE holy fuck the Hound just lopped that dude off at the belly button. And Lancel gets ventilated. Fucking mess.

Cersei’s fucked up, and we just about got Shae’s back story. Fucking tease.

And Hound may be cleaving bitches left and right, but fire makes him go all swimmy. (And Bronn rules: Fact.) Fuck the water, fuck the fucking fucking fuck. Clegane: Out. And note that no one answers back to that proclamation.

And we get to see Joffrey’s yellow hide. Faced with anything he can’t just wish away to the cornfield, he has no resources. Why would he do anything but run to mama, shame or no?

And Tyrion with the St Crispin’s Day speech of pure pragmatism. We few, we happy few. We band of LET’S FUCKING KILL THEM.

Wound punch! Cersei should, in point of fact, have been born a man. Not sure about Lancel.

Oh, Sansa, kiss him. You know he loves you.

OK, nobody tosses a dwarf. And that sorry little axe is sharp enough. And fuck your… Uh oh. Next wave.

And holy shit, Stannis is over the wall and putting steel through skulls.

And thank you, Ser Magneto, and HEY WHAT THE FUCKING SHIT. 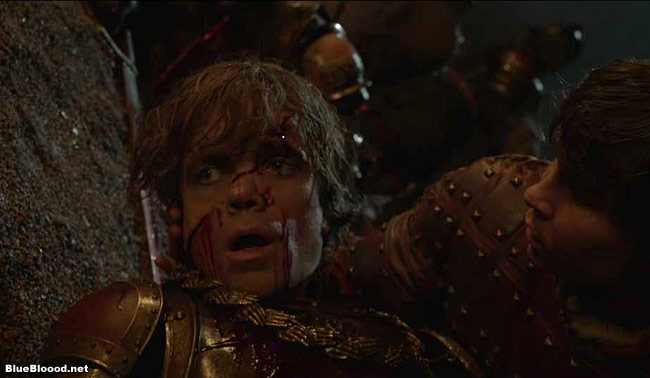 And Podryck Payne proves himself the doughty Wolfgang Van Halen of this tale. You look like a hopeless dipshit, but you stand up when it counts. Omar scar for Tyrion, but hey, could have been headless horseman time.

And Cersei has some cheap parables to impart, along with a wee taste of fucking poison. Nice.

OK, I get it, there was a third wave of Oh I don’t fucking care. Tywin crossed that huge map we see at the start of every show, he hooked up with Kid Flowers, and it’s all supposed to make sense. Fuck this. I don’t care.

Next week we get a teaser for next season, and it better be fucking good. And I don’t want to see any god damned wicker boxes with “dragons” in them, or I am going to be exceedingly put out.

Posted by Will Judy on May 27, 2012. Filed under Headline, Popcorn. You can follow any responses to this entry through the RSS 2.0. You can leave a response or trackback to this entry
Tags: aiden gillen, alfie allen, bronn, cersei, clegane, daenerys, davos, emilia clarke, game of thrones, hbo, joffrey, lancel, maester pycelle, petyr carcetti, sansa, shae, sibel kikelli, theon, tyrion, varys