So last week’s immolation victim is some kind of book critic? That’s not cool man. Ain’t nobody got time for that shit. Is some tv writer gonna come after me now? Hopefully I’m not on the radar of any “True Blood” writers. 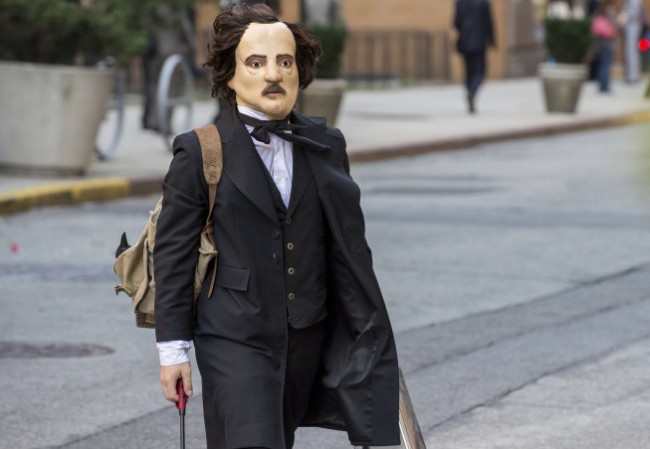 As each character’s chapters unfold, the experts can’t understand what Joe’s message is. He’s taking revenge on some things, that would explain the book critic and kidnapping his son, trying to kill his ex. But otherwise, the sorority girls, more of the same from before? He’s definitely trying to torture Bacon and get under his skin and is doing a pretty bang up job so far. But is he still trying to do art with dead people?

The Nanny and Fake Gays are having domestic issues because the Nanny is a freaking psycho too. Or she’s just more dedicated than the others. She has drunk the Kool-Aid like whoa. The Sad Gay gets cut by the Nanny and runs off to prove to himself that he’s not actually gay. Or rather because he really is in love with the other guy. Would you call this Stockholm Syndrome? Reverse Stockholm? The Hunter becoming the Hunted?

I don’t trust the wife of Rick the Immolator. Sure, she’s got the scared victim routine down, but you can’t trust anyone. OH COME ON! I liked that guy! See. SEE! I told you. It seems like everyone was fooled in this episode and even the victim’s are psychos. People sure do die in really gross, unexpected ways in this show. Kudos for the originality, but god damnit, this is some cray cray shit.

I am rather impressed with the soundtrack of this show. Spooky, gothy songs that fit the mood and freak you out. I wish I could watch this during the day, but you, my special readers demand instant gratification. Maybe I could get Fox to send me screeners! What do you say NewsCorp? I actually like this show! Think about what I’d be saying if I didn’t!

Posted by Raygun Robyn on February 4, 2013. Filed under Entertainment, Headline. You can follow any responses to this entry through the RSS 2.0. You can leave a response or trackback to this entry
Tags: cult, following, fox, horror, kevin bacon, poe, psycho, wtf