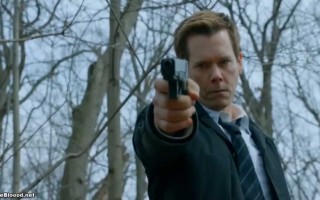 The Following – The Final Chapter


We made it to the last episode. We slogged through those last couple episodes, clinging to the hope that there is going to be a payoff with this finale. Or at least some more stabbings. Joe’s story is drawing to a close and it’s looking pretty grim for him. He’s already been stabbed twice be […]

The Following – Whips and Regrets


Now that the Cult has dummy Claire, Joe insists on antagonizing Bacon even further with an obnoxious phone call. He’s like an ex that you can’t get rid of. Or a bill collector. Or just those goddamn spam calls you get for cruises or whatever. I hate those. Claire’s introduction to the Cult house is […]


Murder isn’t easy for everyone, despite what The Following would have us believe. Jacob is having bad thoughts after killing his boyfriend ala Cuckoo’s Nest last episode. Paul is now haunting him and making him doubt Emma for sure, and maybe the Cult too. Emma’s noticeable shock at seeing him again is going to cause […]


Kevin Bacon finally returns to tv in a leading series roll, making “Guiding Light” fans everywhere happy. From all the commercials and previews, it was hard to guess exactly what this show The Following is about. We definitely got a feel that it was about an escaped serial killer that is a real psychopath, but […]


I thought this interview was really interesting and worth sharing with people who might not have otherwise caught it on FOX on their own. Russell Simmons accepted Bill O’Reilly’s challenge to appear on the network, but I guess Bill’O chickened out, so the interview was conducted by former Arkansas governor, and conservative Presidential candidate, Mike […]