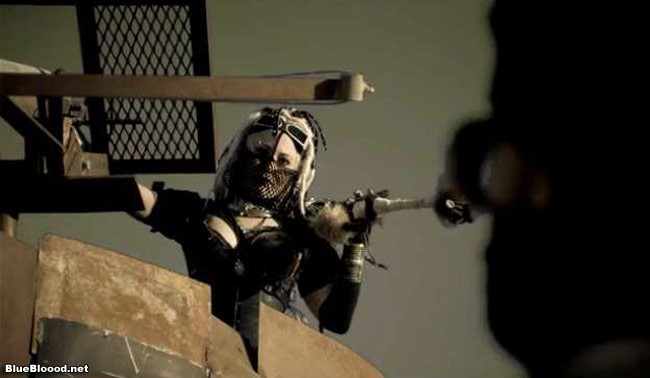 A while back, the fabulous Raygun Robyn covered the Wasteland Weekend for Blue Blood. Now, if you are like me, whenever your friends show you fun pictures of Mad Max style shenanigans in the desert, you think to yourself that you’d love to attend something that cool-looking. As soon as they hold it in a four star hotel. I love the aesthetics, but I’m a polar creature who fares better in chill than heat. And I’m kind of addicted to hot running water.

Well, you’re in luck! The masterminds of Wasteland Weekend, who also have some impressive science fiction and fantasy movie cred, are making a film. It is now time for the final push on the Undying Kickstarter. The concept is heroic self-repairing steampunk zombie protagonists in a Max Max dystopian (but really pretty) future. From a pop culture deconstruction perspective, I would argue that the zombie has been depicted as the hero at least as long ago as Julie Walker, played by always smoking hot Melinda Clarke, in Return of the Living Dead circa 1993. But that doesn’t really matter. The key selling point here is kickass Wasteland Weekend visuals through the same VFX supervision as Jack the Giant Slayer, The Chronicles of Narnia, Harry Potter And The Deathly Hallows, The Lord Of The Rings Trilogy, and Starship Troopers. Bonus points for Fox from the most recent season of SyFy’s Face Off FX makeup competition reality show.

A movie that reinvents the zombie in a post-apocalyptic world. By the Wasteland Weekend crew and a VFX Oscar nominee.

Every monster, whether it be a vampire, a werewolf, a space alien, started off in the movies as a villain. But after a while, they get to be the hero. But that hasn’t really happened for the zombie yet (at least, not in a straightforward action movie). It’s time to change that.

It’s time for zombies to get their day as the hero. And while we’re at it, let’s put them in a Mad Max-style post-apocalyptic world full of desert outposts, off-road vehicles, flamethrowers, and mayhem.

Sound like your idea of a great short film? Us too.

A stranger wanders out of the wasteland into one of humanity’s last outposts. He is one of the Undying. Unable to die. Almost impossible to kill. But he will risk his immortal life… for love.
THE WORLD

In this movie, the zombies are the warrior heroes, and the humans are the despicable bad guys. In their dystopian future, the moon has been torn asunder, cities have turned to deserts, and civilization has withered down to vicious, isolated, warring tribes.

WHO IS MAKING THIS MOVIE?

We are very proud to have assembled an incredible team for this film, and we are still adding more folks both in front of and behind the camera.

** We will be shooting in 5K with the RED EPIC camera (used for films such as Prometheus and The Hobbit). **

Eric Fox and Morbx FX. Special zombie makeup and prosthetics.
Eric was featured on the 2013 season of the SyFy show Face Off.
https://www.facebook.com/EricFoxMorbx

Dave Hardberger. Visual FX photography.
Award-winning cinematographer and miniature fx expert. Films include The Lord Of The Rings, Return Of The Jedi, and Bladerunner.

The Wasteland Crew. A phenomenal group of expert set-builders, car customizers, costume makers, and passionate extras who can create a post-apocalyptic world like no one else.

We’re a group of people who have worked both inside and outside the Hollywood studio system. We’ve come to KICKSTARTER to push the boundaries of uncompromising, unencumbered, un-focus-grouped filmmaking. To make the kind of movie you’ve always been waiting for (whether you knew it or not!)

We know what it takes to make a big movie with a thrilling story and visuals second to none. We’re not only going to give you 10-15minutes to remember, but we’ve got continuations, extensions, and prequels to this story ready to go. Feature films, web series, TV, you name it. We’ve been working on this world for a long time…
WE NEED YOU!

The only way this project can happen is with your involvement. This is a BIG little movie, and every dollar we raise helps to make it even bigger. So take a look at the exclusive rewards we’ve put together for you, and above all, share our Kickstarter link everywhere you can. Together, we create something that’s never been seen before.

We’re film industry veterans and we’re confident that the minimum budget we are trying to raise will enable us to create the incredible world we’ve envisioned. (And just wait and see what we can do if we raise more!) However, the fact that we are filming largely outdoors means that there could always be weather delays that push filming back (it does rain in the desert once in a great while). Luckily, our work has made us very familiar with many usable post-apocalyptic locations throughout the Southwest should we need to film in another area due to weather.
There is also the chance that unseasonably high temperatures during our planned desert shooting dates at the end of May through mid-June could cause our entire shoot to be delayed until the Fall.
Lastly, the realities of scheduling in Hollywood mean that members of the cast and crew could become unavailable for one or more of our dates. But fear not, we have ways to work around that, and should we somehow have a team member drop out completely, we have a lot of great folks that can fill in.

Do you have someone providing music for your movie?

Yes. We currently have a composer lined up (a name you may be familiar with…) but we can’t reveal the details yet. But we do really appreciate the interest from those of you who have offered to provide music for our project.

When are you filming?

Will the Blu-ray and DVD discs play on non-U.S. players?

Yes. The discs will be authored as REGION-FREE so that they can play anywhere in the world. (However, the DVD will be NTSC and not PAL, which could cause some issues for older European DVD players. This is not an issue with the blu-ray.)

What size is the machete? Can it be shipped overseas?