After a surreal day of attending first the Bay Pay Forum on the future of banking and digital currencies, following by a private Wells Fargo event at the Beverly Wilshire, I felt like I could finally exhale and relax when Forrest Black and I arrived at the gallery opening for the art showing at La Luz De Jesus in June. Sometimes the human soul just really really needs a dose of art. There was a nice crowd there. Luminaries in attendance (besides me, Forrest Black, and Gallery Direct Matt Kennedy of course) included Lydia Lunch, Will I Am, Howie Pyro, and Angelyne.

Jasmine Worth does very Gothic work, complete with cloaks, dark tattoos, tears, religious symbols, tidy black frames, and a very dark color palette. William Zdan‘s work is a bit more bloody and horror-themed, with a lot of reds, and very cool creative framing presentation. Chris B. Murray‘s work comes across with a soft feel at first and it is only on really looking at it that one spots the more rough or gloomy themes. Somehow he makes it pretty. And Joel Nakamura paints the most adorable Godzillas ever. They are so cute that they look like they are badass and destructive just because they are mischievous. 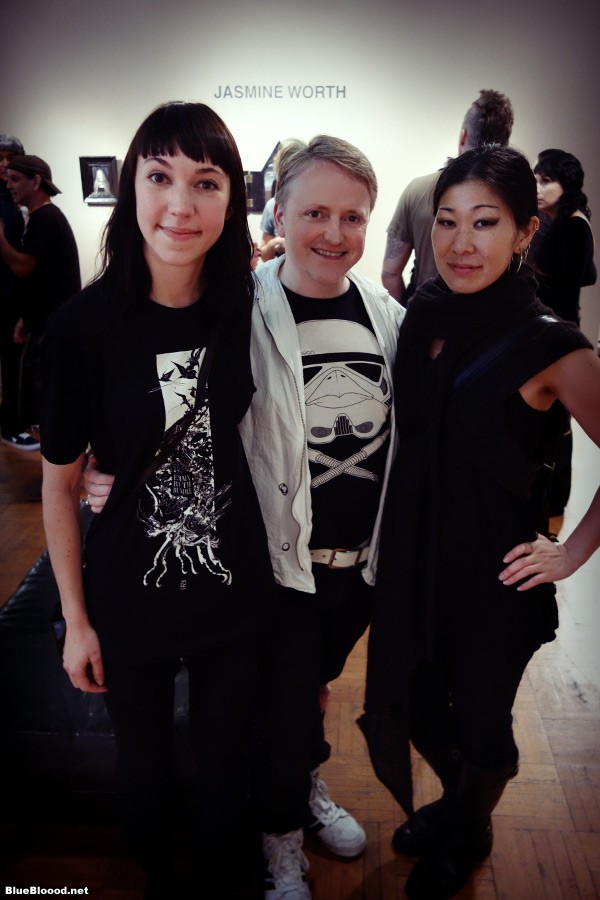 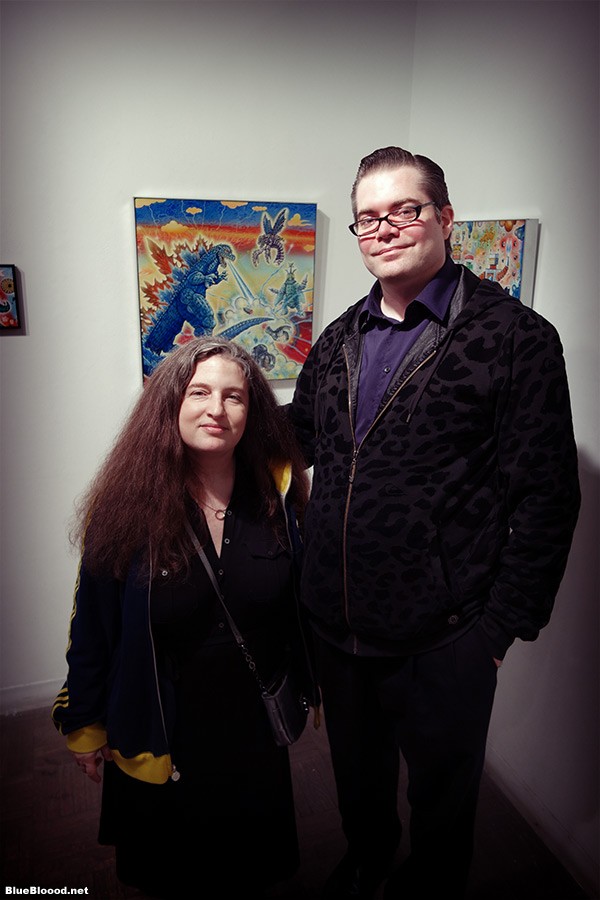 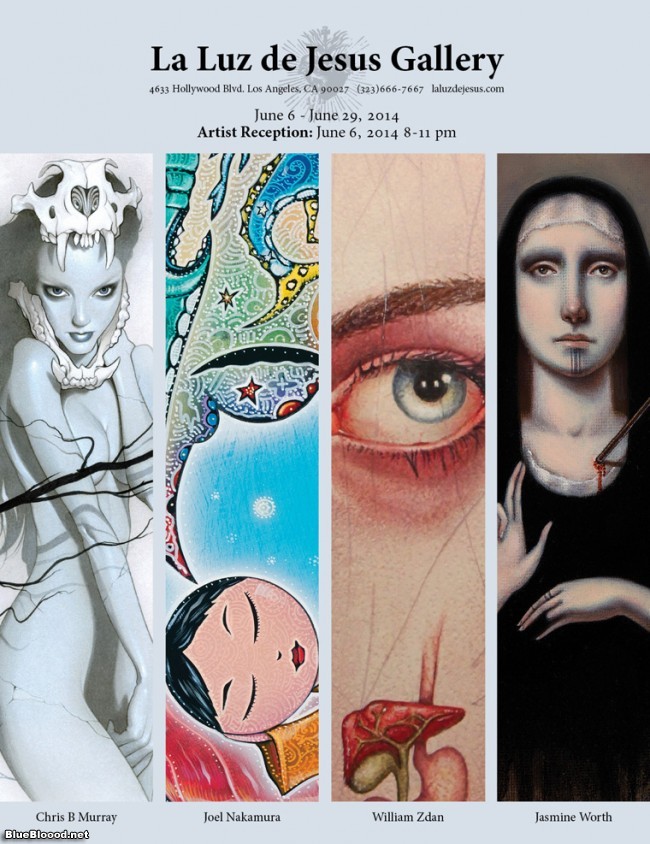 “I’m titling this new body of work Seasons Change. The underlying meaning is that nothing does (or should ever) remain the same. If change or growth doesn’t take place than it dies. People, places and ideas are constantly metamorphosing whether it’s in a positive direction or negative. I’ve experienced a great deal of growth in the last couple years and have experienced these changes with friends & family. To be alive and to truly experience life as it’s meant to be experienced I feel that people must always challenge themselves and evaluate their choices and how they affect people and their surroundings. This body of work represents a form of growth and / or change within each piece. I hope it inspires those who see it to challenge themselves and continue to move forward.” – Chris B. Murray
[nggallery id=92]

Chris B. Murray has enjoyed a successful exhibition history in the midwest. This is his first show at La Luz de Jesus Gallery.

Bento is a single-portion takeout or home-packed meal common in Japanese cuisine. A traditional bento holds rice, fish or meat, with pickled or cooked vegetables, usually in a box-shaped container. Containers range from disposable mass produced to hand crafted lacquerware. While readily available in convenience stores, bento shops, railway stations, and department stores, Japanese homemakers often spend time and energy on a carefully prepared lunch box for their spouse, child, or themselves.

Joel Nakamura was included in our 25th Anniversary Show. He is a staple of the Santa Fe art scene. His last feature exhibition in Los Angeles was back in 2008, when he exhibited alongside Nathan Ota right here at La Luz de Jesus Gallery.

Willian Zdan was raised in the manufacturing community of Detroit, and this has unquestionably influenced his world view. Classic techniques and religious iconography are stripped of their cliché and given new provocation. His most recent series, Humors, examines the longstanding connections between medicine, secular art and social defiance. The Humors (the preponderance of body fluids, respective organs, earth elements and corresponding human temperaments) are found in each of the paintings, along with bloodletting tools, leeches and other (now debunked and marginalized) medical conventions (like phrenology).
[nggallery id=89] – more images forthcoming!

While still aiming to capture a sense of visual spirituality, the paintings in this series employ some of the trademark compositional elements used in religious paintings. Depictions of hovering, saintly human organs and tools of early medicine are transposed over an otherwise supernatural devotion. The panels, layered with oil stain, have been distressed with loose and primal gesture indicating age and nature. This is balanced against the tightly rendered paint application. The composition, like the theme, is in conflict.

“My hopes are that the viewer will become an unapologetic scientist of whatever they interpret from my work.” – William Zdan

In Jasmine Worth‘s latest series, Sacred Feminine, she brings together Goddesses, saints, and mythology to fully explore the ever-changing role of the feminine in spirituality. This series is intended to invite the viewer to explore their own relationship with the many aspects of the divine. Her paintings are a cabaret of vibrant hues that blend soft textures and colorful characters–often against gloomy themes, but she’s not afraid to reverse and contrast those relationships for the sake of composition. Whatever the ratio, the results are the same: beautiful and thoughtful manifestations of strong individuality.
[nggallery id=91] – more images forthcoming!

Posted by Amelia G on June 10, 2014. Filed under Art, Happenings, Headline, Trappings. You can follow any responses to this entry through the RSS 2.0. You can leave a response or trackback to this entry
Tags: angelyne, art, artist, chris b murray, godzilla, goth, gothic, hollywood, horror, howie pyro, jasmine worth, joel nakamura, la luz de jesus, lydia lunch, matt kennedy, will i am, william zdan