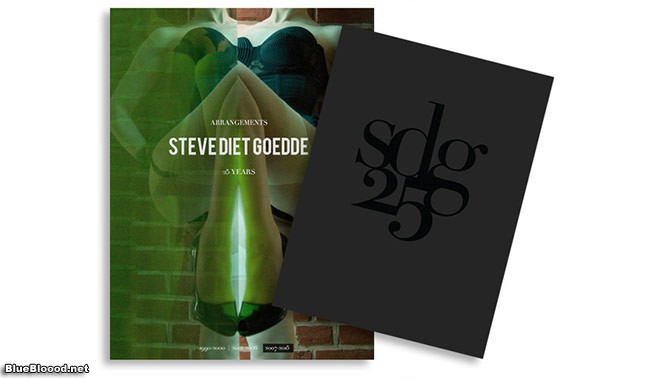 As Blue Blood turned 22 this past October and BLT will be 25 this coming October, you should expect to see a lot of these anniversary projects, as the people we came up with celebrate a quarter century. Photographer Steve Diet Goedde did coffee table art books very early on in his artistic life, with Beauty of Fetish and Beauty of Fetish II. Now he is doing a three book retrospective of the years since his last book. Kickstarter makes this sort of project more feasible than it might otherwise be. I don’t mean to go all up-hill-barefoot-in-the-snow-both-ways, but Steve did this kind of project when it was much harder too. You’ve got a few days left to back his Kickstarter, as Arrangements Volume III becomes part of the Century Guild catalog of esoteric art books.

“This year of 2015 is a major milestone in my life. It is the year that I turn 50. And if that isn’t enough to celebrate, it also marks my 25th year of photography. I have now spent exactly half my life devoted to my artistic passion.” -Steve Diet Goedde

2015 marks two landmarks in the life of Steve Diet Goedde: his 50th birthday, and 25 years as a photographer.

We are celebrating these landmarks by creating three volumes compiling iconic images from the Steve Diet Goedde archive and never before seen images from these now-legendary photo sessions featuring a legion of celebrated models. This is the definitive retrospective of the images of Steve Diet Goedde, carefully edited by Eric Kroll.

“This project was initially going to be one book comprising of work that I’ve done since the publication of my last book in 2000. However, once I examined the amount of work from the past 15 years with Century Guild’s Thomas Negovan and my editor Eric Kroll, we were staggered by just how much material there was to choose from, and the word “book” became plural. We decided to use three volumes to celebrate the 25 year landmark, both to document unseen images from the classic sessions and my newer work together as a whole across a quarter of a century.” -Steve Diet Goedde

We will be creating three books as a countdown, from the most recent photographs back to the earliest work. The three volumes will cover the following periods:

This campaign is for the first volume to be released, titled ARRANGEMENTS VOL III (2007-2015). The book will be produced in a limited edition of only 1000 copies plus two special clamshell editions in editions of 50 and 25.

And… Nearly half of the photographs included in this volume have never been made public.
Why a physical hardcover book?

More and more of us each year experience artworks on the internet. But like many other things, there is nothing more powerful than a real-world, physical experience. ARRANGEMENTS VOL III (2007-2015) will be printed on heavy fine art paper stock with painstaking pre-production by James Kay at Transmission Atelier to ensure that the experience of exploring the pages is as sensual as the imagery contained inside. We’ll also be paying special attention to the hardcover materials, and for the exquisite clamshell editions we’ll be doubly attentive to be certain that the tactile experience is even more special.
Why Kickstarter?

Using Kickstarter as a platform for preorders allows us to deliver directly to you a beautiful book for a fraction of the price if it were offered through traditional retail distribution. The cost to create this book is well over $50,000, and Kickstarter allows us to defray the cost of creating a proper offset, high-quality fine photography book. No digital printing! Following a traditional publishing model, using the high quality materials we desire to make this book, a true boutique limited edition publication like this would mean a retail price of approximately $225. Using this platform, we can create a limited edition book that will feel to a book collector like a $225 art book, but that we will sell for $100 retail. By preordering via Kickstarter you can own a copy for a special advance price of only $59.

By preordering you not only receive a special price consideration, you can receive special unique bonuses as a thank you for your support!
The hardcover book- Limited Edition of only 1000 copies. $59 preorder, $100 retail.

Special bonuses… Kickstarter-only photo prints, signed by the model and the photographer! $27 for a single photo, $129 for photo/signed book package- personalized to you by the photographer.
The deluxe edition clamshell volume. Only 50 created. $350 preorder, $450 retail.

There will be 50 deluxe signed and numbered collector’s edition copies (#26-75) produced with an alternate cover with debossed area and inlaid graphic and presented with an original photograph printed by Transmission Atelier and pencil-signed by Steve Diet Goedde in a gorgeous debossed clamshell case featuring the SDG 25 logo. Signed and numbered by Steve Diet Goedde.
The ultra-deluxe “SDG 25” edition clamshell volume. Only 25 created. $850 preorder, $1500 retail.

There will be 25 ultra-deluxe signed and numbered collector’s edition copies (#1-25) produced as the other clamshell edition but featuring an even larger scale inlaid graphic. Book is signed and numbered by Steve Diet Goedde and presented in a gorgeous debossed and deluxe gloss varnished clamshell case featuring the SDG 25 logo that also holds three original photographs printed by Transmission Atelier and a silver gelatin hand-pulled photo, all pencil-signed by Steve Diet Goedde.
A personal note: Kicking it Forward.

“As of this writing, I’ve created a dozen campaigns- and backed over ninety. I just spotted this logo on another campaign and think it’s a great way to articulate my feelings about the Kickstarter community. Crowdfunding is a powerful way to use the internet as a direct tool for connecting creatives with the end users and owners of their work. Anyone using Kickstarter- buying or selling- is taking part in a relationship that is truly a win-win situation for everyone involved. It’s as close as we get today in this larger digital world to having a small-town economy, a local shop where cool things get recommended, or knowing someone who can get you the special ‘inside’ deal on something your friends are all talking about.” -Thomas Negovan
Risks and challenges

Century Guild is a fine art gallery founded in 1999. We have produced a number of well-regarded art books and are excited that this will be a gorgeous addition to our library.

Posted by Amelia G on February 27, 2015. Filed under Art, Books, Sex. You can follow any responses to this entry through the RSS 2.0. You can leave a response or trackback to this entry
Tags: books, crowdfunding, hardcover, kickstarter, photography, steve diet goedde