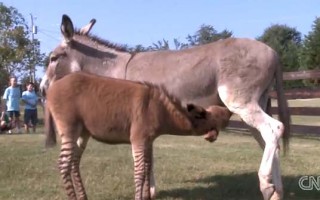 - by Amelia G in Happenings, Oddities


Katherine Dorsett at CNN reported today that the Chestatee Wildlife Preserve, in Bumfuck Dahlonega, Georgia, now features a zedonk. Preserve founder C.W. Wathen says he keeps his donkeys with his zebras because donkeys are extremely calm and they help the zebras chill and not run through fences. Apparently Sarah the Donkey does a little more […]


You all will be pleased to see that Blue Blood hottie and Community member Halcyon Pink’s HugNation project is getting great props as he tours the country. The basic concept is that every Tuesday at 1pm Pacific time, you should hug who you are with or hug yourself. This could get dicey depending on where […]


So a lot of magazines and sites and television shows are doing top ten lists right now. I had planned to post a Blue Blood list of the top ten sexiest men and women of the past year. Unfortunately I ran out of gas after thinking of Anderson Cooper and Vladimir Putin. I didn’t even […]