Katherine Dorsett at CNN reported today that the Chestatee Wildlife Preserve, in Bumfuck Dahlonega, Georgia, now features a zedonk. Preserve founder C.W. Wathen says he keeps his donkeys with his zebras because donkeys are extremely calm and they help the zebras chill and not run through fences. Apparently Sarah the Donkey does a little more for the zebras than give them tea and sympathy. Zeke the Zebra is now a proud dad. 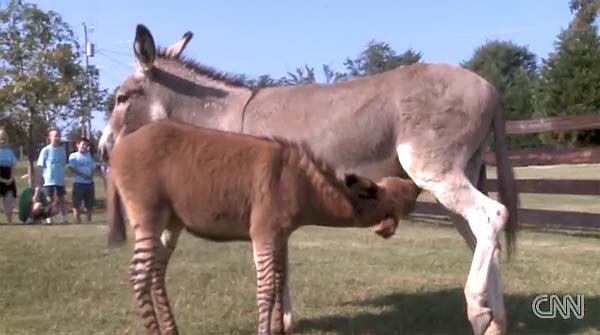 Apparently it is quite unusual for a male zebra and female donkey to breed. The preserve folks were concerned that Sarah’s pregnancy was going on a bit long. They were very happily surprised when the reason turned out to be that she was giving birth to a zedonk, half donkey and half zebra.

Apparently Pippy the Zedonk lies down poised to get back up like a zebra and makes sounds like a zebra, but she is a chill babe like her donkey mom. It is expected that Pippy could live for a couple decades but will probably be sterile. Although zedonks are sometimes deliberately bred, this would standardly be done with a donkey sire and zebra mare. A zebra sire and donkey mare is an even more unusual pairing, so what Pippy will be like is somewhat anybody’s guess.

I lived in Georgia and never knew there was a place like Chestatee Wildlife Preserve. Maybe it wasn’t there yet then. They do have instructions for using their helipad to arrive, so I think it is not exactly in central Atlanta. Looks very cool though. They also have a baby grizzly, and right now, they are working on expanding the environment for their grizzly bears.