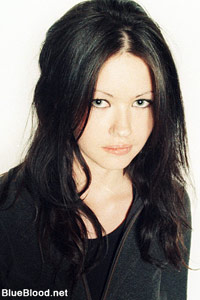 The thing I love best about photography is the way it can capture and preserve a moment.

Most of my ephemeral moments have gone unrecorded. When I got to college, it was my twelfth school in twelve years. Moving that often gave me many qualities I like about myself, but it also meant that there were so many people, so many communities, so many adventures, and so many times in my life which evaporated with nothing to show they ever took place. Just my memories with no one to share them with. People who do not move can at least have conversations about “remember when . . .” but my friends and compatriots were scattered across dozens of countries.

I always loved when people showed me their photo albums and yearbooks and explained the most important images. Oscar Wilde once famously said, “After the first glass, you see things as you wish they were. After the second, you see them as they are not. Finally, you see things as they really are, which is the most horrible thing in the world.” Oscar was speaking of absinthe, but pictures are a lot like the green fairy that way. Sometimes a flattering photograph represents a loathsome situation and sometimes a hideous photograph is a reminder of something wonderful.

I reminded myself of what is most important about a photograph, while going over the scans for the two most recent photo galleries by Forrest Black and yours truly. These galleries are bittersweet. While I was going over the final edit to put the pictures in the BlueBlood.net system, one of the people pictured instant messaged me to tell me she had just had a nasty break-up with the guy, also pictured, who she was with on this particular Halloween night at Bar Sinister. Two of the girls Forrest Black and I shot that night became mortal enemies shortly thereafter. Over a guy, of course. There are pictures of people from multiple bands which should have broken bigger than they did in there. Heck, there are pictures in there of someone I used to really like who eventually was nearly singlehandedly the main reason Forrest Black and I all but totally quit rock journalism and photography. Occasionally shooting musical friends and high dollar jobs, Forrest Black and I probably still shoot more rock work than most of the knobs wandering around Los Angeles claiming to be rock photogs, but we used to do so much more and feel so differently about it. These two galleries also feature a girl I thought could be a great mainstream model, but she never followed up the contacts I gave her. There’s the promoter, who was one of the first people we ever covered in Blue Blood in print, who just closed his most recent venture. The list goes on. It was a fabulous night, even though we broke the camera we were shooting with. This happens more often than 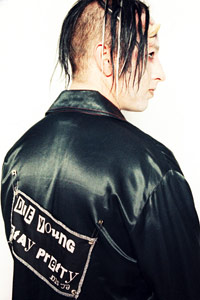 I’d like in a nightclub setting. I’m not even sure where all the pictures from that shoot are because the ones we shot on a second camera seem to be MIA.

Regardless, there are so many people here I have felt such fondness for. Dreams and relationships may wither or shatter, but our photographs preserve one hot moment.

There is even one person in our photographs here who is dead now. He was a nice person, talented and fun, and he passed away far far too early. Some of Forrest Black’s and my photography was used in his memorial service, but he never got to see these pictures. There are many things I feel there will always be time for, but sometimes the clock stops. Rest in peace, J.D. I guess there was a reason you had to wear a shirt which reads, “Die young; stay pretty”?

Posted by Amelia G on January 9, 2008. Filed under Blue Blood. You can follow any responses to this entry through the RSS 2.0. You can leave a response or trackback to this entry
Tags: halloween, memories, mortality, oscar-wilde, photo-albums, photograph, photographs, photography, pictures, yearbooks