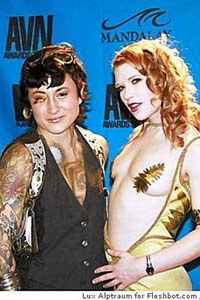 I find the whole issue difficult. On the one hand, I know that site members often enjoy girl/girl pairings, even if the women pictured would not normally have sex with one another in the natural course of events. So there is certainly money in shooting lesbian sex, but I suffer from the punk rock problem of not being particularly fiscally motivated. Something which puts even more social pressure on me to shoot faux lesbian interactions is that many altmodels believe that their ticket to fame and fortune is being photographed fondling the breasts of a model more internet famous than they are. You might be shocked at how much static I have received from mostly straight models for declaring a moratorium on fake lesbian shoots for BlueBlood.com. If two people want me to photograph them having sex, as an artist, I am only really inspired to shoot them if I believe they are truly into each other and would be making love whether or not there was a camera in the room.

As an adult, my take on sexual orientation is . . . let’s just say different from what it was as a teen. I really don’t care about whether someone’s genitalia are innie or outie; I just want something real, something genuinely passionate, something with a true human connection.

So you’d think that people would just find it hot if Madison Young brought Syd Blakovich as her date to the AVN Awards. The talented Julie Simone shot some stuff of Madison Young which will be appearing on BlueBlood.com soon and I already covered extremely sexy badass Syd Blakovich’s Ultimate Surrender triumphs on here. So you can pretty much take it as a given that I think Syd Blakovich and Madison Young dating would be hot.