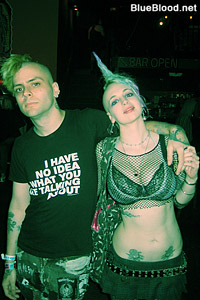 I’ve known Blue Blood Photographer Carlos Batts for what seems like a few lifetimes at this point. Our paths first crossing in the pre-internet zine scene, East Coast comic book conventions, and a million other points of common reference in the sexy cool artistic realm along the way since then. Looking back, some of those scenes seem like different worlds these days. We both live in Hollywood now, coincidentally a few blocks away from each other to be even more specific. But, maybe it’s not coincidence at all. A lot of interesting cool creative types end up in Hollywood. That’s one of the reasons I really enjoy it out here, being such a sort of heaven for eclectic creative types driven to document and enhance or otherwise decorate their public existence.

There are always a million things to do in Hollywood and it’s rare (or unfortunate anyway) to do everything within one sort of scene. Instead, people tend to party hop, swinging from velvet rope VIP to drug addled loft gatherings, trekking from inspiring artistic exhibits in every media imaginable to legendary dive bars to see the latest and hopefully greatest bands before they break big or break up.

Carlos’s latest video project, Young Hollywood, presents the cacophonous meld of cool glam youth and seedy glitz, the edgy music mixed with erotic pop art and nightlife craziness that is the young Hollywood experience today, all through the eyes of an artistic pornographer. The party to celebrate it’s release very much reflected this jumbled elemental mix as well, and although I couldn’t party quite as long as I would have liked, everyone seemed to be having a really good time. The shindig was held at the relatively new Safari Sam’s venue, which I mostly remember as it’s previous incarnation, a relatively spacious non alcohol serving full nude strip club that smelled oddly like laser tag. But, it has more recently been impressively transformed into a pretty cool punk rock venue with a good stage and well designed and roomy layout for attendees. I really should get over there more often. 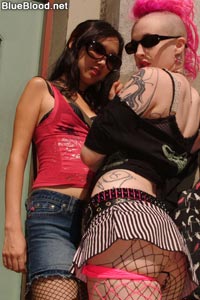 It was great to see Carlos and the always gorgeous April Flores, whom you should remember from our sexy Blue Blood Holiday Cheer wishes, along with the fun cast of characters involved in the production. I was pleased to meet super sexy Mandy Morbid and although Kimberly Kane gets top billing for the movie, in my opinion Mandy and Lystra really steal the show. Punk porn provocateur Zak Sabbath was also in attendance and it was nice to finally talk to him for a bit as so many of our mutual friends have been trying to get us together for some sort of mayhem for a long time now.

All in all, it was a fun party for a fun and sexy project and a lot of the people involved are cool folks. Young Hollywood should be available for order and instant download very soon.

Posted by Forrest Black on March 29, 2008. Filed under Blue Blood. You can follow any responses to this entry through the RSS 2.0. You can leave a response or trackback to this entry
Tags: april-flores, carlos-batts, hollywood, mandy-morbid, party, zak-smith